Be a cut above the rest and help a vital Thanet charity at the same time during this weekend’s Addington Street Fair.

Ramsgate hairdresser Marcello Marino has teamed up with fair organisers and Oasis charity to offer top class cuts for a donation to the domestic abuse support organisation.

Marcello, who has run his business in Ramsgate for a whopping 27 years, has also offered his services to run workshops with Oasis.

The hairdresser, whose salon is based in West Cliff Road, is a well-known personality in the town and even took his skills onto Britain’s Got Talent in 2009.

Before his act of one-minute haircuts he told top judge Simon Cowell he could do with a snip.

Marcello, who has appeared on several reality shows, said: “I told him that awful flat top had to go. He told me to get on with it (the act)!”

Marcello gave The Isle of Thanet News a quick demo of his skills, with fair organiser Becky Wing as his model.

In less than 15 minutes he snipped, combed and blow dried Becky’s locks to give her an entirely new look – in return for a donation to Oasis, of course! 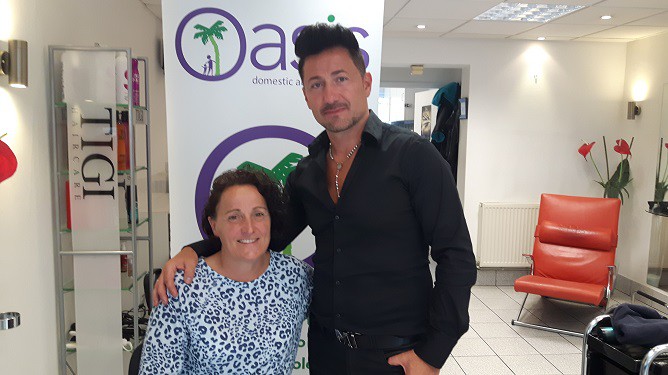 He will be based by the fair’s information stand in Addington Street on Sunday ready to transform visitors and raise funds.

Fair organisers will also have a stall of goodies with half of all money raised also going to the charity.

Dee Murphy, from Oasis, said: “All donations go towards funding the vital work that our organisation provides to families across the Thanet area.

“This can go towards counselling for our clients, emergency food and clothing for our women and children staying with us as well as ensuring that our service is sustainable for the future.”

When is the fair?

Sunday, September 3 from 9am until 5pm

What’s on offer and where?

Addington Street businesses including the Queen Charlotte, Falstaff Hotel and Vinyl Head Café will be joining in, with additional specialist food and drink for the fair.

Visitors will be able to experience different music at three main points along the street provided by local band Minus, the High Chaparrals from out of town and The Palace Magic Organ.

There will be numerous stalls selling everything from food, vintage, retro, bric-a-brac, handmade and hand crafted goods as well as second hand items. 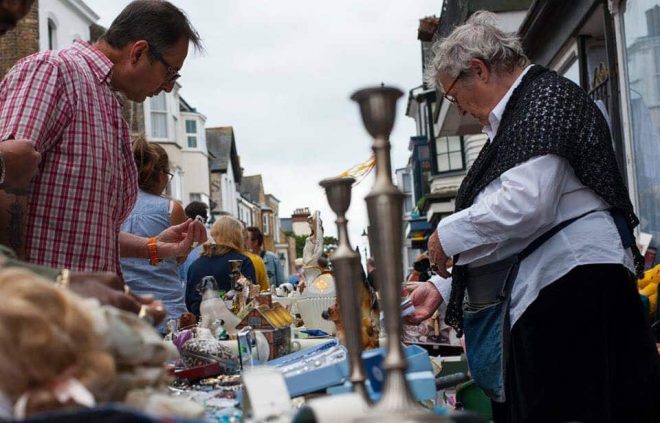 Music from Hotsy Totsy and Sabina Desir and a charity dog show organised by Angels4Dogs.

The Addington Street Revival Fair is inviting locals and visitors to come and join the event and  ‘dress to impress’ in vintage, historical or retro clothing; any era, any style. Spotters will be out to find the best adult, child and group of people.

There will also be a maritime treasure hunt and craft/clothing tent for children to dress up and make things to wear, as well a pet display of ‘creepy crawlies’ from Pet Haven. Displays from belly dancers, line dancers and in yoga  as well as vintage cars and bikes are also planned.

Visitors might also want to keep their eyes peeled for the ‘Stacey Fleming, Made Bed’ art installation which is said to feature nice clean sheets, a Maggie Thatcher mug and absolutely no discarded condoms – although it is not expected to be sold off for the £2.2 million scooped by artist Tracey Emin for her bed! 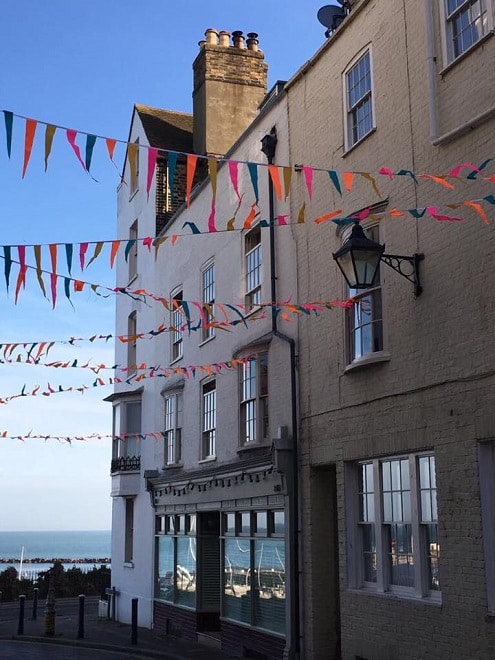 Locals have been busy making bunting to create a unique feel to the street with generous funding from Suzi Nina Interiors, Lydia Wood-Power, The Queen Charlotte and Mr Jeeves Cleaners. Lee Nichols with his Studio on the street is busily giving free of his expertise to begin creating a series of ‘Gems of Ramsgate’ lamppost banners, from photographs provided by residents. This project is possible through a capital grant awarded by Ramsgate Town Council and now being supported by locals, businesses and resident’s associations. The first six banners are due to be revealed on the day of the fair.

Why is the Oasis charity important?

The charity has been delivering services to people experiencing domestic abuse in Kent for 22 years.

It began with a handful of dedicated people opening a refuge service in 1994. Back then 2 women a week were being murdered as a result of abuse in the home. Sadly that statistic remains the same today.

Every day staff at Oasis are confronted with the distressing results of this issue on the lives of the adults and children.

Today Oasis delivers services to adults and children both in refuge and in the community.

They are also carrying out a series of workshops in schools to teach about healthy relationships and recognising the signs of an abusive relationship and have a charity shop raising funds at 170 Northdown Road, Cliftonville.

Domestic violence can happen to anyone, regardless of age, gender identity, religion, orientation, ethnicity, income, or disability.

For local independent domestic abuse advice in Thanet and Dover call the RAISE taem on 07718657160
open Monday – Friday, 9am – 5pm, there is an answerphone outside these hours.