Swimmers were encouraged to raise funds for various training and rescue equipment that the club requires to deliver its programme of ‘personal survival and lifesaving’ awards, teaching, competitions and outreach work.

Swimmers, family and friends met outside the old lifeguard tower on Ramsgate main beach.  The club’s past members were out in force again this year.

Registrations completed by club instructors, Faye Burnap, Joanne Willson and Alison Mayo (36 members took up the challenge) Safety briefs given and swimmers numbered up, so they could be identified when landing on Viking Bay at Broadstairs.

Senior members entered the water from the beach and swam out towards No5 buoy (South quern) approximately half mile off shore.  Younger members boarded the RIB and were ferried out to join the swimmers.  With everyone in the water the group headed off towards Broadstairs. 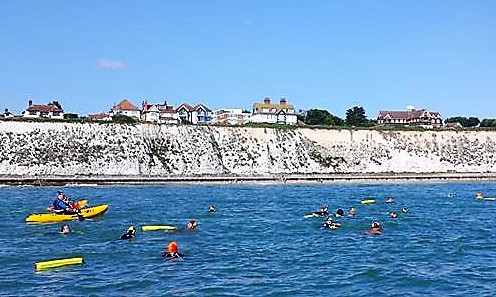 Sea conditions this year were very good with undulating swells throughout the course.  The speed demons were making short work of those and thundered onward, the club pack soldiered on with encouragement.  At the half way mark (Dumpton Gap) all swimmers headed towards shore.

With the tide running in the swimmers’ favour, they headed for shore to reduce the risk of overshooting Broadstairs.  By time the swimmers were a few hundred metres from shore (Louisa Bay), Broadstairs harbour acted as shelter from the effect of the tide.  The club pack found their second wind and once within the safe-haven of Viking Bay, swam to shore.  Crowds of well-wishers cheered as they proudly stepped out of the water and onto the sand.

Everyone safe and accounted for, it was time to change and warm up.  Shortly after the medal presentation was given by James Uren (RNLI area lifesaving manager).

A tremendous effort by all swimmers who took part.  Big thanks to all who help set the club’s annual Ramsgate to Broadstairs swim