England cricketer Ryan Sidebottom will take part in an historic match on the Goodwin Sands during next year’s Royal Harbour History Festival.

The Nottinghamshire, Yorkshire and England cricketer will be one of the seven players for Ramsgate’s Royal Harbour team when they pit their skills against a Royal Navy side on the notorious 10-mile stretch of sandbank, which lies four miles off the coast.

The match, which will take place on June 15,2018, aims to celebrate Thanet’s maritime heritage, commemorate the thousands who have lost their lives on the ‘ship-wrecker’ sandbank and share the stories of east Kent’s rich history with the public.

The Goodwin Sands is responsible for the world’s highest concentration of shipwrecks. Submerged at high tide but exposed and dry enough to walk on at low tide, the sands sit at the narrowest section of the busy Straits of Dover shipping channel. 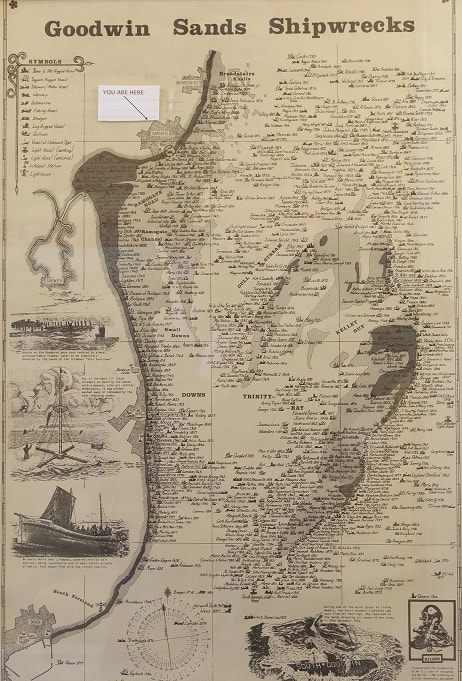 More than 2,000 ships are believed to have been wrecked at the site with the greatest loss of life occurring during the Great Storm of 1703. Those included in the death toll were aboard Royal Navy warships, HMS Northumberland, HMS Mary, HMS Stirling Castle and HMS Restoration.

The sands are also the final resting place of scores of RAF aircrew who gave their lives during World War Two’s Battle of Britain. 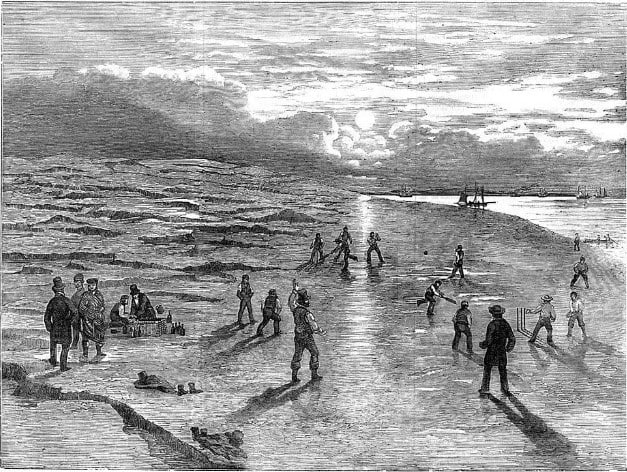 But there is another historic tradition at the Goodwin Sands – that of playing cricket at the site during low tide. The first known match was in 1824, organised by Ramsgate harbour master Captain K Martin.

The matches were played through the decades for some 180 years, even being depicted in a water colour by English Romanticist landscape painter JMW Turner whose strong links with the isle are marked by Margate’s Turner Contemporary gallery.

When the Royal Marines School of Music was based at Deal they would play a game on the bank each Summer but no matches have taken place now for well over a decade.

The Royal Marines have had a presence in east Kent for more than 300 years, from the onset of the French Revolution, through the Napoleonic Wars and during both World Wars until the closure of the Royal Marines School of Music in the 1990s. They will be represented in the Royal Navy team when the Royal Harbour History Festival, taking place in Ramsgate between June 15-17, 2018, revives the match.

Presenter and historian Peter Snow will talk to camera about the historic importance of the Goodwin Sands and why the match is being held, while The Bishop of Dover will hold a minute’s silence after a Last Post.

Ryan Sidebottom said: “The Goodwin Sands have long been the Holy Grail for cricketers and I am delighted to be playing in this unique match. I would imagine “Fishing” and “Flipper” will take on whole new meaning four miles out at sea and I only wonder which side will find it more of a sticky wicket!”

Travelling to the Goodwin Sands, playing the match, holding a minute’s silence, the Last Post and then departing the sandbank has to be completed within a tight timeframe.

A risk assessment has been carried out by Commander Nick Chatwin OBE, Royal Navy and Andrew Thompson, Estuary Services Ltd. Between them, they have 66 years of Naval experience.

Andrew “Tommo” Thompson said: “We need the lowest of low tides to get enough sand to play the cricket match on and the highest of high tides to get off again. A friend of mine is an ex-Navy hydrographer and he put in dates, we checked the data and this showed the times we need to work to.

“We will be getting to the sands with craft from the British Hovercraft Company, based in Dover. There will be three safety boats in addition to the hovercrafts. We will have a maximum of 40 minutes to set up, play the Last Post, have the Bishop of Dover hold the minute’s silence, play and get off again.

“We will need to travel through the east side and come up the ‘lagoon’ to the Goodwin Knoll. Coming from the north there would be problems with hitting the sands and the sheer cliff.”

A test route has been carried out with the help of Ramsgate’s Stuart Barnes of RIB Request.

After a match tea in the Royal Navy Tent for players, invited guests and schools, the teams are expected to depart from the Western Undercliffe at 6.45pm to arrive at the Goodwin Sands for 7.15pm. The game will be played from around 7.40pm to 8.20pm. Teams and personnel will leave the sands at 9pm – high tide- and return to Ramsgate for 9.30pm.

The rules of play will be adapted so players do not swap ends.

There will be time for a maximum of four overs with each player rotating every two minutes to bat or bowl.

Some 50 cricket balls will probably be required as most – if not all – may end up in the Channel! All equipment has been provided by Gray-Nicholls.

The match will be shown live on a plasma screen at Ramsgate’s harbour and on the main sands. When the teams return they will be treated to a fish and chip supper in the Royal Navy marquee.

RHHF chairman Victoria Nielson (pictured) said: “The Royal Harbour History Festival team would like to thank the Royal Navy, Royal Marines, Estuary Services, British Hovercraft Company, Gray-Nicholls and RIB Request and all those participating for all their assistance to help make this unique cricket match come to fruition.”

If, on June 15, the sea state is more than slight and the wind force exceeds 2 then it is likely the match will be cancelled.

The three-day Royal Harbour History Festival in Ramsgate is expected to attract some 80,000 people next year.

The event, from June 15-17, 2018, is designed to highlight Thanet and East Kent’s rich historical tapestry and cultural identity, and places a signiﬁcant emphasis on commemoration, celebration and education.

The festival will promote the wealth of concentrated local history and cultural air, sea and land inheritance. It will also highlight the area as a Destination History County.

Alongside programmed events, the event will feature diverse history modules, each with a mixed and unique three-day programme that will excite, engage and inspire all ages and tastes.

There will be a focus on education and encouraging children to learn and take pride in their local coastal history. Friday, June 15 will be the Schools’ Festival Day.

The programme will include speakers, musicians and historical interpreters, particularly those recognised at a national or international level.

The festival has the backing of Thanet District Council, Visit Kent and Heritage Action Zone along with the support of the Lord Lieutenant’s office, the Royal Navy, the RNLI, The Cinque Ports Confederation, the Association of Dunkirk Little Ships, University of Kent, Landmark Trust and many other cultural organisations.

Find out more about the planned events here and here