A street food ‘hub’ with a double-decker bus as the anchor has sprung up on the promenade in Margate.

Vegan, curry, fish, juices and gluten and dairy free ingredients are all on offer at The Sun Deck on Royal Crescent Promenade. 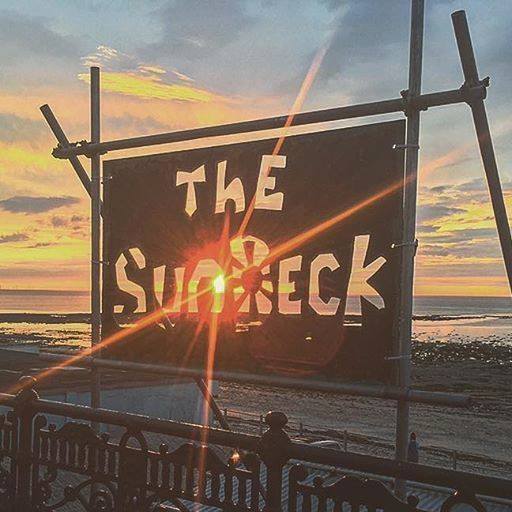 The site was first taken on by Bus Café bosses, couples Simon Lindley and Jodie Ellena and Alexander Muir and Lois Du Plessis, in February after discussions with site owner Nick Conington of Sands and Nayland Rock hotels. 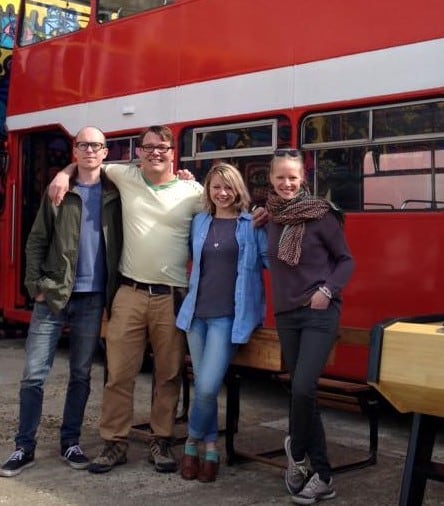 The four went into business after a conversation in a pub revealed a shared dream to run a café.

Originally based at Fort Yard the move to the prom has opened up a new audience – and offers an amazing view.

Jodie said: “The site was derelict and being vandalised. It was covered in rubbish and glass. We approached the landlord and moved on in February. “

On The Sun Deck 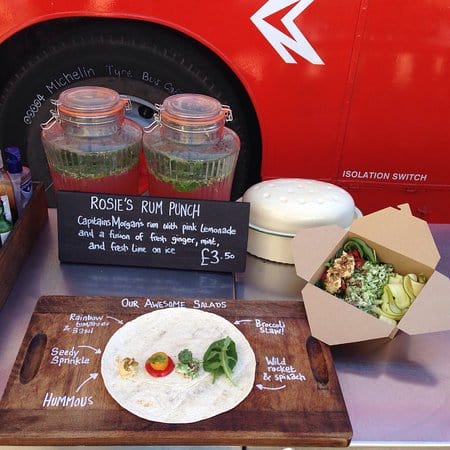 The two couples, both living in Margate, bought the bus in March 2015 two weeks after they first discussed the idea. It arrived from Liverpool and they set about a 6-month project of ripping out the interior to then create a kitchen downstairs and café seating upstairs, all the while trading with customers able to tuck into barbecue offerings. 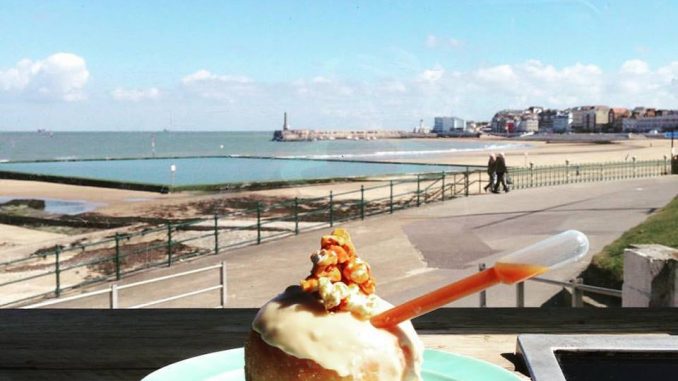 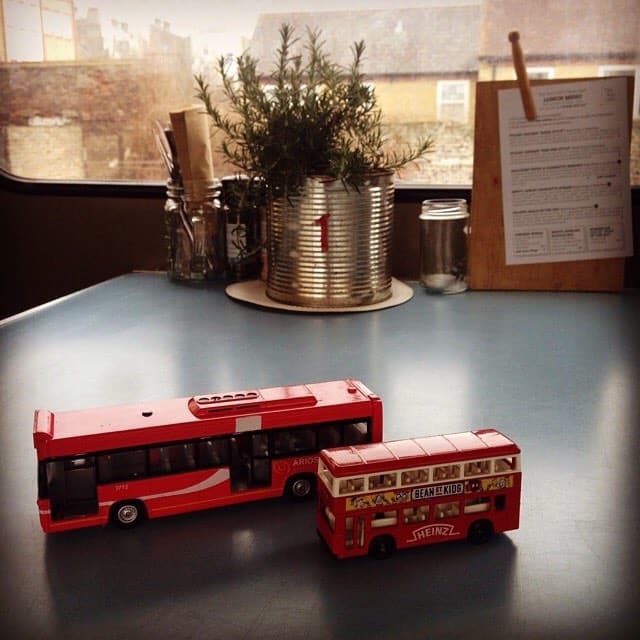 And there are more taste-bud busting offerings on the lunch menu with an array of meat and veggie salad boxes and wraps and  Xander and Lois specialising in South African barbecue food.

All are made with fresh, good quality ingredients from local farms and organisations.

Jodie said: “We had a vision to turn it (The Sun Deck) into a street food destination for Margate, with independent businesses, high quality food, an ethos of shopping locally and ethically and making sure everything is recyclable.

“It’s about reinvesting back into the local economy.” 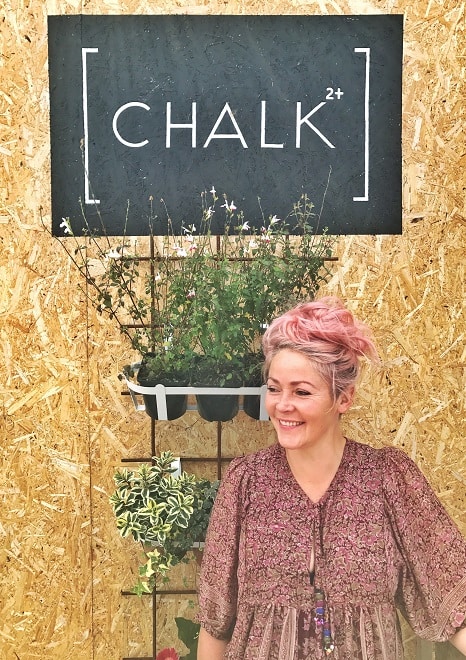 Chalk café has been at the Sun Deck for just over 6 weeks and is run by Carey Mann, who also opened Swedish coffee and food shop Mala Kaffe on the Stone Pier in March 2016.

She has been joined in the venture by Margate resident and former Coca Cola CEO Clive Saffrey.

The café offers an all vegan menu – although many would not be able to tell the hotdogs and kebabs from the meat versions. 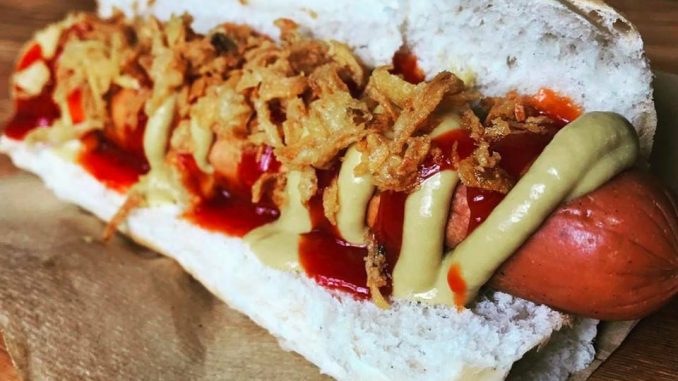 Although they look exactly as you’d expect, the hotdogs are made from pulses, grains and seitan (known as wheat meat), pulled pork is actually shredded Jackfruit and kebabs are again made from seitan.

Other offerings include the Tin Miner double ender pasty which is savoury at one end and sweet at the other and seaside tart made from allotment vegetables. 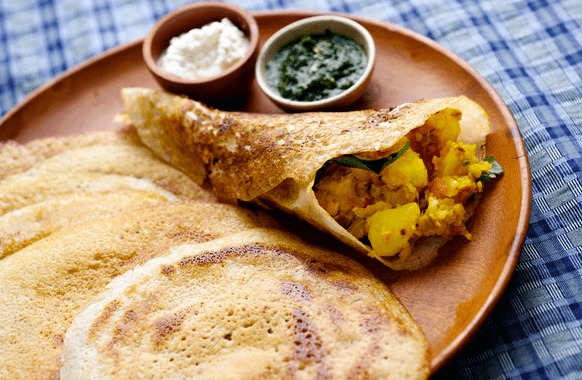 But Chalk is more than a café, it is also part of the Oasis Domestic Abuse Service Blossom project. 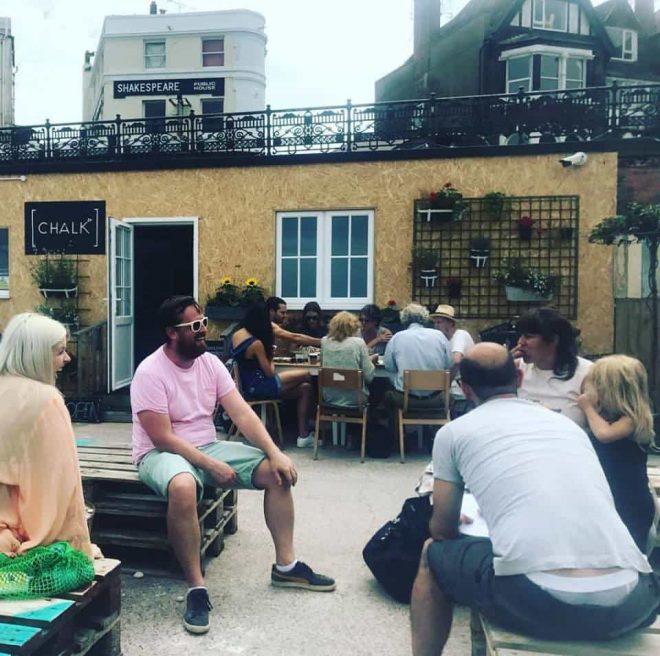 Carey, who moved from London to Margate with musician husband Johan who has just created a stunning studio at All Saints industrial estate, said: “This project is more like a social enterprise than a business just taking money.

“The social enterprise is with Oasis and started after contact with their outreach programme, Blossom. Women come out of the refuge but may be looking to build confidence and learn new skills so they can get back in the workplace. 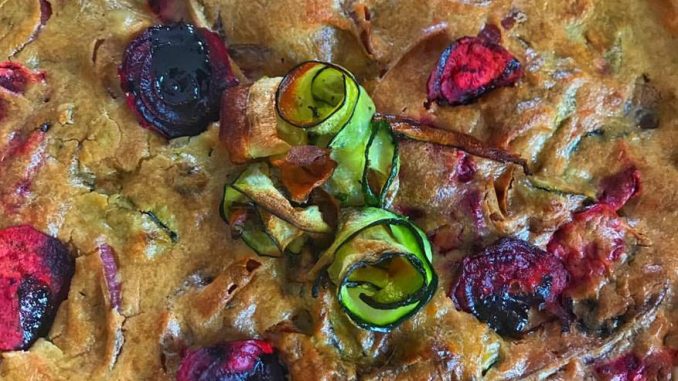 “We have one volunteer here already and she is amazing and we have another lady coming. We teach baking and cooking skills and Allpress are involved with free training.”

The vegan menu is being trialled, and seems to be a hit. 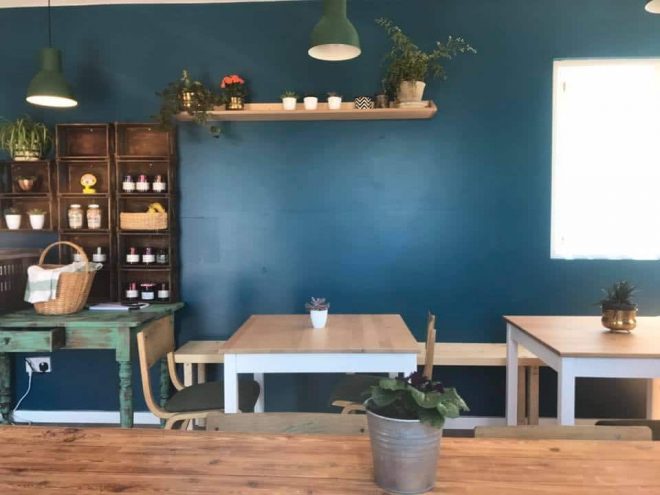 Carey, 47, said: “People are raving about it on social media but we need to inform people we are here and see what support it gets. I want the food here to be delicious enough for anyone to eat, not just vegans. A lot of people come here and don’t realise they are eating vegan food!” 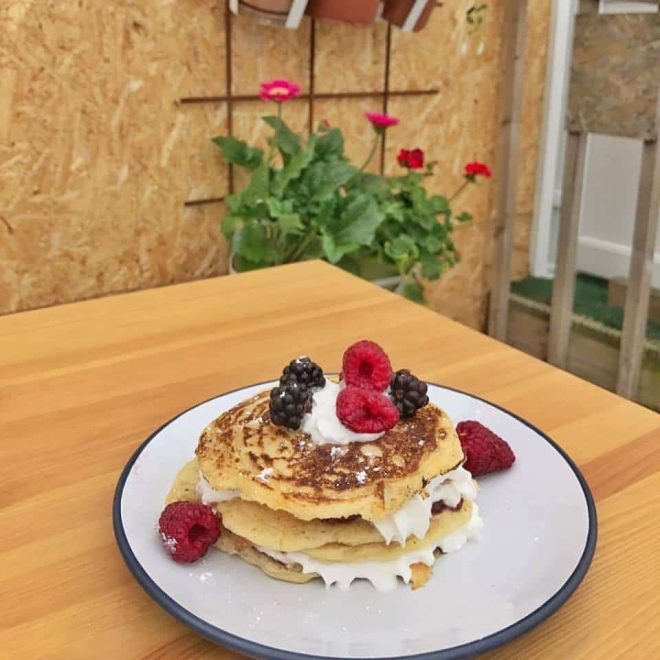 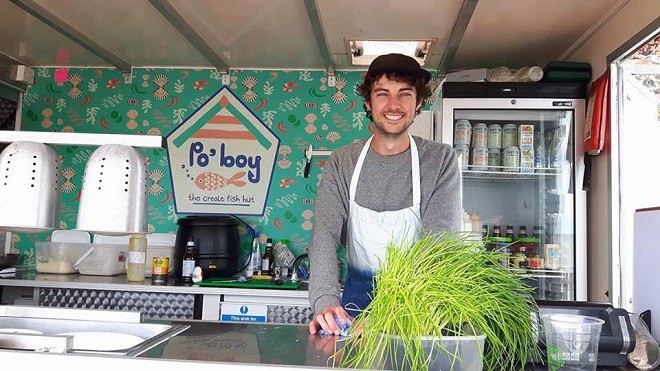 The 27-year-old set up on the Sun Deck just over four weeks ago and offers fish and chips but with added big flavours. 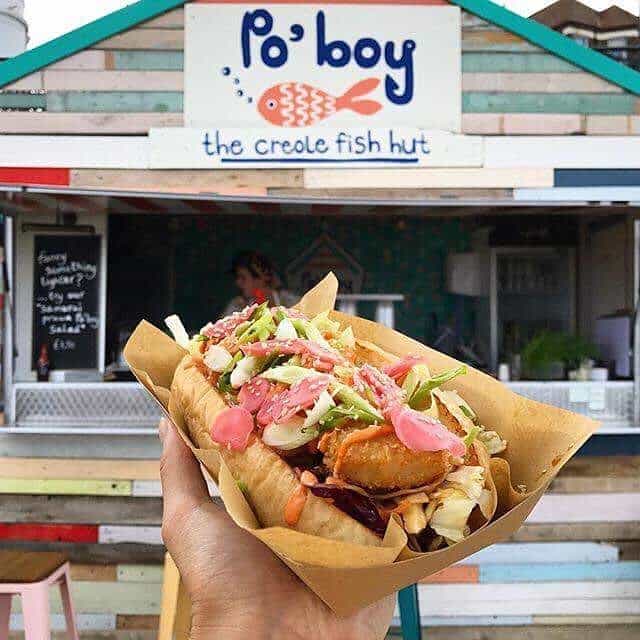 Tom said: “I wanted to do fresh fish and chips like it should be but with tastes from around the world. I use fresh, seasonable and local ingredients.

“I wanted to do a food van and was considering the harbour but then was offered a place on the Sun Deck. 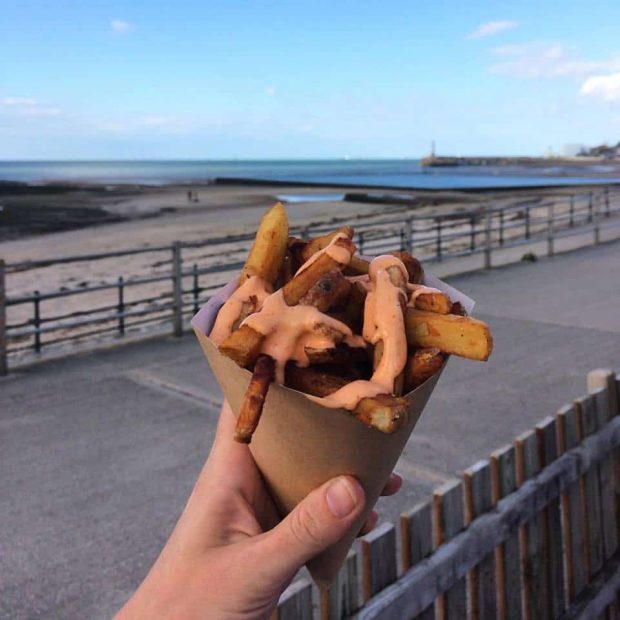 “We have been acting co-operatively, sharing ideas. I’m here this season until October and hopefully the site will be secured to come back and I’ll maybe get another van for events and festivals.” 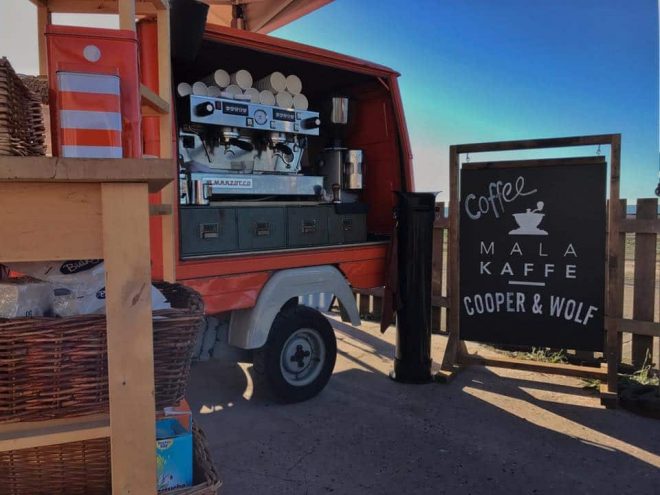 Serving coffee including espresso Martinis, this cart is a joint enterprise between Carey, of Chalk, and Sarah and Alex Ratcliffe, from the Tom Thumb Theatre, who ran the Swedish-themed Cooper and Wolf cafe in London before their move to Margate.

The three previous worked together on a ‘Swedish’ Christmas event which sold out.