As has been the pattern this season, Broadstairs 1st XI were let down by their batting as they were defeated narrowly by visitors Nonington.

Electing to bat first, the home side got off to a reasonable enough start with openers Chris Flint and Elliot Fox battling against some skilful bowling on a tricky pitch. They reached 30 without loss in the 10th over when Flint (14) was bowled by Saddler and this was followed by the loss of Narraway (1) caught at point with some fine bowling from overseas Allen.

Isaac Dilkes was brought the crease and he and Fox looked well-set to rebuild the innings when Fox (13) was adjudged LBW and after that, further wickets fell in rapid succession with Dilkes (12), Swaroop Dasari (3), Jack Wheeler (13), Matthew Frewin (6), Callum Morgan (0) and Chris Kidd (0) all out by the 35th over, leaving the score at 80-9. It was down to the final pairing of Alfie Huntley (16 not out) and Jamie Dewell (26) to bring some respectability to the score and they batted sensibly for 11 overs to advance the total to a defendable 123.

Nonington’s reply started well on a pitch that if anything had improved during the course of the afternoon. By the start of the 12th over they were 32-0 and looked set to complete a comfortable victory. The first breakthrough came in Dasari’s first over with Morgan holding onto a skied top-edge from Betts at the second attempt.  6 overs later, Frewin removed opener Burrett although with the score at 58-2, Nonington still looked secure.

Dasari then weaved his magic bowling a spell of overs that the Nonington middle-order were unable to handle. A special highlight was an outstanding catch by Dilkes and short leg. By the end of the 31st over, the visitors were 96-8 and reeling. A remarkable victory for Broadstairs was in sight, if they could just complete the final two dismissals. Dasari completed his 10 overs without being able to add to his tally and with Kidd also bowled out. It was down to Flint, Frewin and Fox to make the breakthrough.

As the innings wore on, it became clear that fortune was not going to smile on the hosts and in fact at times it appeared to be sneering at them. With a couple of dropped catches, an unsuccessful appeal for a caught behind and at least half a dozen fulsome LBW shouts within 2 overs turned down, it was not to be their day. Nonington eventually overhauled the target in the 44th over and Broadstairs were left to rue the lack of application in their batting, their missed chances and their lack of fortune.

With a number of results elsewhere going against form, the result leaves Broadstairs in 3rd position and their fate still in their hands. Although a tall order, three victories in their remaining fixtures against Gravesend (A) , Gore Court (A) and Folkestone (H) would see them promoted to Division 1. 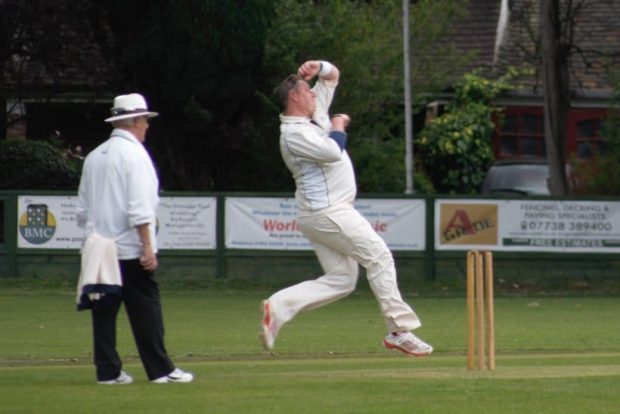 This week Broadstairs travelled to bottom of the league Nonnington in the search of 20 points.

Andy Marshall lost the toss but was happy to bowl first. Bradley Ellison and Luke Palmer sharing the new ball duties again. Nonington got off to a flyer, 5 runs coming from the first delivery after it hit the helmet behind the wicket keeper. But after that they found runs hard to come by.

Palmer getting the breakthrough, Tom Marshall taking the catch behind the stumps, they repeated the same a couple of overs later. Ellison then joined in removing opener Bennett, caught by Brian Simpson. Nonington then put on a small partnership, Captain Adam Cork and young keeper Harry Wells taking risks and getting away with it, until Adam Izzard took a nice catch at first slip off Ellison to remove Wells.

Ellison then removed Cork, caught by Oli Frewin and then bowled Jason Cork first ball to have a chance of a hat trick which he didn’t take.

Broadstairs then got a run out, courtesy of some excellent fielding by Archie Ralph-Harding who then came onto bowl along with George Kidd.

Nonington were all out in the 42nd over for 98.

Izzard and Simpson opened up, Simpson adjudged LBW for 9, Frewin went in at 3 but fell for 3. Palmer was in at 4 and looked good, assisting Izzard who was batting positively and picking up the run rate. Palmer then fell for 13 bringing Ralph-Harding to the crease. The youngster batted superbly, hitting straight and finding the boundary on a couple of occasions. Izzard then fell for a well-made 34, an innings that had put more or less given Broadstairs victory. Captain Marshall joined the youngster and they finished the innings off in the 23rd over. Ralph-Hardin 19* and Marshall 11*.

The win keeps Broadstairs in the hunt, although other results didn’t go their way, they are 23 points away from second place and have 2 home games to come against fellow promotion rivals Gravesend followed by third from bottom Gore Court.