Todd being a far commoner name than Keighley, I can now be much ruder about acquaintances with less fear of being uncovered.

Useful that, this week, having had my first brush with Airbnb.

And what a brilliant idea is is! Open your home to smiling strangers, and then, with any luck, clear off to work, so said strangers can set about minutely examining your larders, bookshelves and medicine cabinet, passing judgement, then gleefully assassinating your character.

At least, that’s what I did. My new husband spent the week moaning softly – “No! Stop that! Don’t go in there – oh, for heaven’s sake! They might be back any moment – DON’t touch THAT! Jeez, what have I married?!”

But I was having too much fun to heed. The minutiae of other people’s lives fascinates me, and particularly married couples, now I’m part of one. Tucked up in bed, listening to their affectionate chatter, the gently applied scoldings and suggestions, felt a delightful, irresistible privilege. And the next morning, poking about in their stuff.

How many candles other people have! How many cushions, how many different kinds of tea! Three  categories of stuff I’ve never been able to find any use for, myself. Fascinating! Did you know, some people actually manage to live their lives without a kitchen shelf devoted solely to marmite? Instead, they have craft benches! Telescopes! Harry Potter themed doodle pads covered in mysterious assignations! Who needs to go abroad, when folk in Wrexham are this exotic?

Our first night, on hearing we were honeymooners, our host spent perhaps three minutes showing us round her flat, before clearing off and leaving us to it. Eight hours of snooping later we collapsed, exhausted, only to be woken at 3.30am by a terrible yowling and scrabbling. A large ginger cat seemed to want Putting Out. The owner still wasn’t home. My darling husband and I conferred.

“It must be allowed out. I haven’t seen a litter tray. And what else could the yowling mean?”

“Yeah, whatever. I’m going back to sleep.”

The cat and I stared at each other. The yowling continued. I opened the front door. It gradually eased its way out, then stood staring at the flight of stairs, as though perturbed. I nudged his buttock with my toe. Nothing. Exasperated, I picked him up, marched him down the stairs and chucked him out the front. He sped into the night as though escaping Alcatraz.

My foggy brain registered this development as possibly very bad indeed. That suspicion was compounded when I trudged back up the stairs to be confronted by, first, a litter tray, and second, an anxious man in his underpants.

“You carried him DOWN THE STAIRS? Are you nuts?!”

We spent the rest of the night trotting round Swansea, calling for a cat that never came, wondering if anyone else had managed to get themselves banned from Airbnb with quite such alacrity. At 6am I got a text. 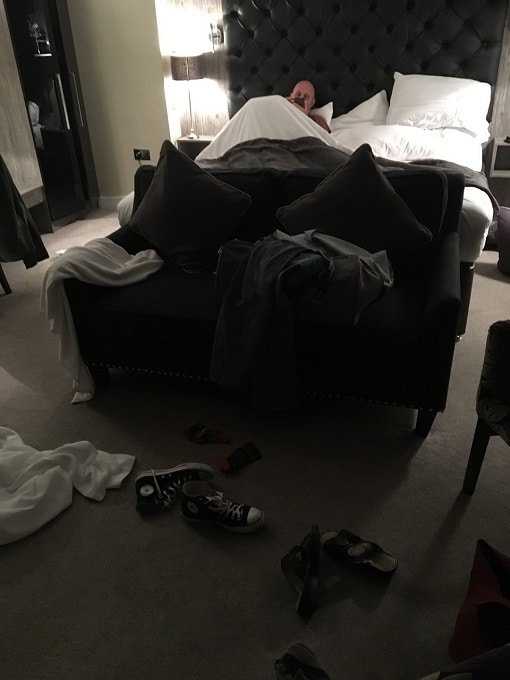 “Sorry should have said, if the cat makes a row just chuck him outside. I’ll fetch him in tomorrow. Sleep well.”

Oh, how we laughed. Hysterically, for about an hour, before going back home to sleep the sleep of the righteous. Even inadvertent near catticide seems hilarious on honeymoon.

The rest of the week passed in a peaceful blur of mingled loving, nosiness, and lengthy organ recitals. A very honeyed heaven.