An application submitted to demolish the Crown & Sceptre pub in Acol and build two homes in its place has been branded a Cell Block H proposal by villagers.

The former Shepherd and Neame pub shut in May 2012. It was then put on the market for £240,000 but only one offer was received and that was later withdrawn. 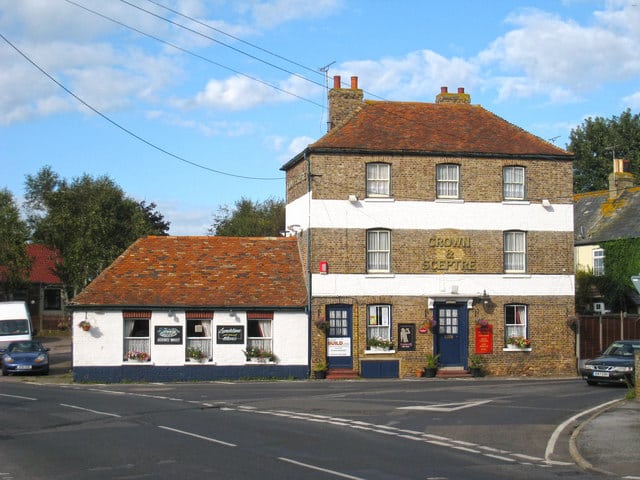 In April 2013 it was sold for a sum below the original asking price but deemed unsuitable to open as a pub again.

Shepherd and Neame said the pub was not viable with falling beer sales before its closure, little passing trade and a lack of kitchen and restaurant space.

Margate Civic Society has objected to the “complete annihilation of the historic building.”

In an objection letter the group says: “There were premises here in the 1400s, occasionally used by magistrates. The house has some claim to literary recognistion as it must be the hostelry featured by William Cobbett in his Rural Rides (1823).”

Previous applications to develop the site have been withdrawn or modifications were requested.

The building is currently in a poor state with the roofs gone and weather damage inside.

A new building already on the site has been described as  “a disgrace” in one letter of objection, with the resident adding: “To erect another huge building will make what used to be a pleasant pub and car park like cell block H.”

The resident also brands the lack of work to put in a temporary roof as “deliberate architectural vandalism” adding: “The developer should be made to restore the building to the condition it was in when he bought it, before he left it empty and rotting for years.”

Another resident also said the property had deliberately been left without a roof and houses built on the same plot by the developer “are an eyesore and resemble a prison block rather than homes.”

The loss of the pub is in addition to the closure of Acol’s shop and post office.

The premises dates back to the 15th century contains a ‘stock’s restaurant’ title, showing magistrates used to hold their court cases at the site.

Prior to 1833 the pub was owned by the Symond’s Brewery of Ramsgate, but they sold the business and pub to Ramsgate brewer Francis Cobb and Son that  year.