On a day when downpours across the county resulted in several incomplete matches, Broadstairs 1st XI were able to secure a victory away to fellow promotion-seekers Old Wilsonians and as a result, climb back to second position in Division 2.

The hosts were put into bat on a tricky pitch that suited swing bowling and they quickly found themselves under pressure at 54-5 with openers Jamie Dewell (3 wickets) and Chris Flint (2 wickets) doing the damage. After an extended rain break, the situation did not improve for the batting side and an excellent bowling and fielding performance from Broadstairs limited Old Wilsonians to 107 in the 39th over.

Matthew Frewin claimed the last three wickets in 11 balls, one of which involved an outstanding one-handed catch by Swaroop Dasari at backward point.

Further rain fell during the interval and it was clear that despite the low target, the visitors would need to bat responsibly in order to complete the victory. However, things did not start well with opener Flint departing in the first over without scoring. Fellow opener Elliot Fox and the incoming Scott Narraway were then able to establish a platform with some careful batting in tricky conditions, advancing the score to 39 when Narraway (13) succumbed to the bowling of Jonathan Rodda.

This promoted two further quick wickets with Isaac Dilkes (0) and Fox (15) making way for Dasari and Jack Wheeler with the score on 47-4. This 5th wicket partnership proved to be the deciding factor as the visitors’ total steadily climbed to 83 and when Wheeler (16) was run out, Broadstairs had the target score in their sights. Despite the loss of two more wickets, Dasari’s excellent batting performance (42 not out) saw them home in the 37th over.

With just 4 matches left in the season, the promotion contest is still wide open with any two teams from six in the running. For Broadstairs in second spot, their fate in in their hands – a final run of four victories would see them into Division 1.

The next fixture is at home to Nonington and the growing support at Park Avenue will doubtless be right behind the young Broadstairs side as they apply themselves to the challenge. 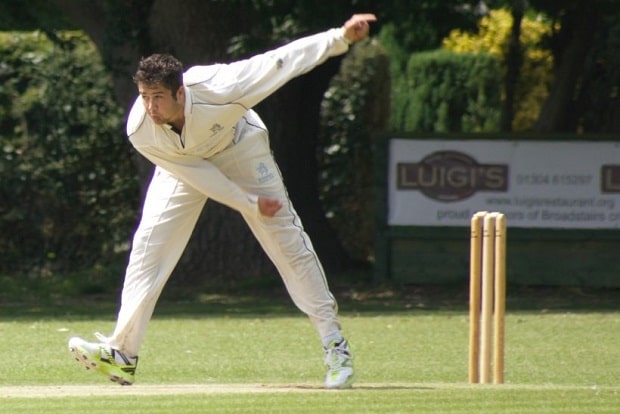 Skipper Andy Marshall won the toss and elected to bowl. Luke Palmer after impressing in his spell last week opened the attack with Bradley Ellison and both bowlers managed to bowl the magic three consecutive maidens before palmer claimed the first wicket, inducing the inside edge. Two overs later Palmer struck again, Lee Hewitt taking the thin edge and Old Wils were 2 down with just 4 runs on the board.

Ellison was back to his usual accurate self, beating the edge time after time. Palmer then struck again, removing the opposition captain who has been in the runs all season, once again caught by Hewitt.

Palmer finished his 11 over spell (11-4-26-3) and was replaced by young leg spinner George Kidd who claimed a wicket in his third over. Broadstairs were well on top but with the completion of the 30th over, the rain came.

Covers were put on straight away and the players took yet another hearty Broadstairs tea. After an hour of rain and a very sodden ground, the decision was made to call the game off and 8 points were shared each. Both teams still have a chance of promotion, however Gravesend have leapfrogged them into second.

Broadstairs travel to Nonington this week in the search of 20 points to really put the pressure on the rest of the league.