A furious mum-of-four from Ramsgate has dumped her bags of rubbish at Thanet council premises, saying there has been a repeated failure to make weekly waste pick ups from her home.

Shop supervisor Sue Bell, from Margate Road, says she has had to contact the authority every week for the last nine weeks because waste has not been collected.

The seagull proof bags should be picked up on a Thursday but Sue says she has had to phone every week since May 5 to say the bags were not collected. In response they were being collected the Monday following each call, until a couple of weeks ago.

‘My bag was stinking’

The 51-year-old said: “Each time I reported it, it was then collected on the Monday. However, the other week it was left for two weeks despite reporting it. At this point my bag was stinking and full of flies and maggots as it was left out the front in the blistering heat, awaiting collection. In  no way do I blame the rubbish collection guys, this is all down to those in the office”

On June 9 Sue received an email to say her road had been omitted from the waste collection rota – although recycling was being picked up.

“Margate Road, Ramsgate has now been brought to the attention of the refuse team to ensure that collections are made as scheduled each week.”

Sue said: “ I was assuming it would be rectified from then but no. I have contacted Cllr Suzanne Brimm and now even resorted to emailing our MP Craig Mackinlay.

‘Still, my rubbish sits outside’

“I had a reply from him saying he will be happy to assist me in this matter but still my rubbish sits outside.

“I shouldn’t have to do this week in week out. No one seems to be acting on it.

“We live on a main road with no front garden so our seagull proof bags are tied to the railings on the main pathway. 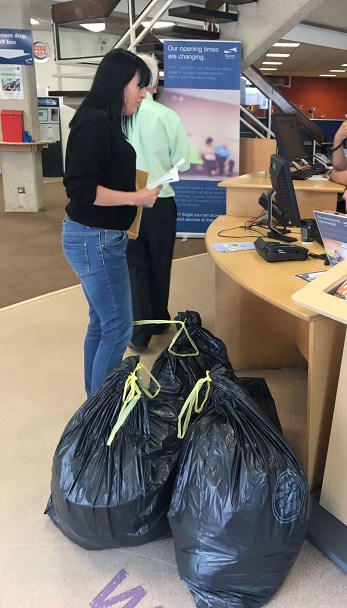 This morning Sue decided enough was enough after her rubbish was not picked up yesterday.

She took the four bags of waste and visited the council offices and Gateway premises, saying it was time “to cut out the middle man” and left them for staff to dispose of.

She said: “I told them that I appreciate that once I report it they do come along and collect on the Monday, except for one they left for two weeks in the heatwave. 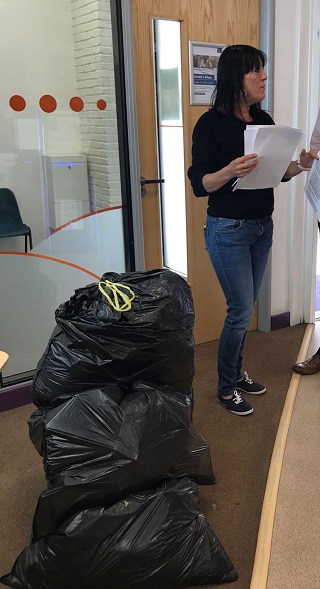 “ I explained that all I want is for my collection to be taken on the scheduled day. I was also told I could not leave my rubbish there. to which I replied I was not taking it back with me and was  cutting out the middle man.

“ I have done everything possible to try and get people to listen and get it resolved. Nobody is listening or doing anything about it. I have been going round in circles. This is what I have had to resort to for someone to take me seriously.”

Sue says her rubbish is put out each Wednesday night in the provided bag and she is mystified about why collections aren’t being made.

‘No other missed collections’

A Thanet council spokesman said: “We’re doing all we can to resolve this issue which we understand is contained to a single property in the road. We can confirm there have been no other missed collections recently in the rest of the street. We are keen to work with the residents concerned to ensure that their waste is being correctly presented for collection.

“Our recycling and waste team has attempted to contact Mrs Bell directly and will continue to do so to ensure that there are no future instances of missed bins at her property.

“Details of how waste needs to be stored outside on the day of collection is provided on our website. A postcode lookup is also available for any resident who wishes to check when waste and recycling collections are due in their area.”