Grovelling thanks are due to Thanet electoral services! After three elections of voting as a Dalek in a powered wheelchair my friend Jackie finally got her wish – a decent ramp with a hand rail as well at Pierremont Hall Broadstairs to get wheelies and stickies safely up the steep steps.

We arrived on general election day to find the ramp in place – not the right place but nearly. It was imposing, a bit like a trampoline underfoot with a jaunty bounce. 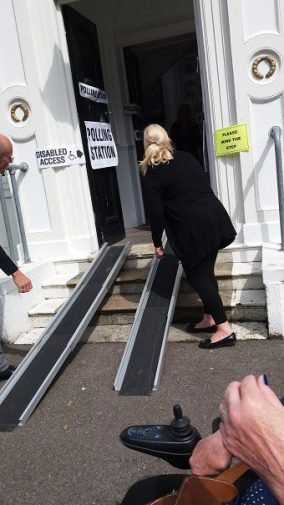 I took a picture. “Don’t photograph me! Delete it now!” says bossy electoral officer. “It’s OK I’ve cut your head off”, I say, thinking guillotine if the ramp doesn’t work…..

There was a notice saying “USE THE RAMP” and already people with functioning legs had grumbled. One person had fallen apparently and it was a bit steep for a lady with a wheeled walker – but the steps are impossible for walkers so it had to be an improvement.

A beard in a red rosette conscientiously got out a tape measure and measured the angle of the ramp to work out if it was long enough (it probably wasn’t quite). Gosh, I thought I carried a lot of useful things in my bag but this was impressive. 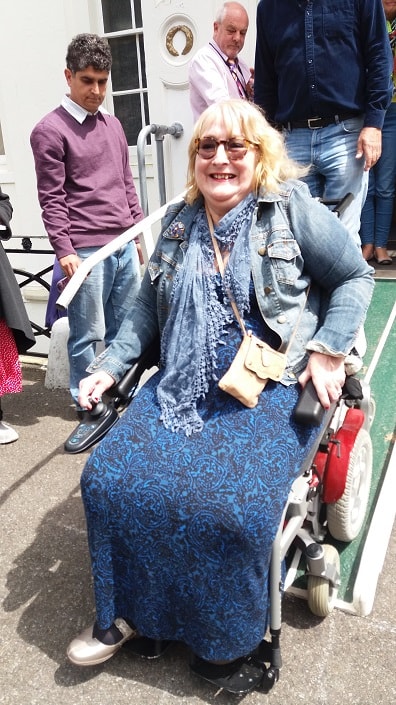 A gentleman sporting a blue rosette made noises about it only being for two percent of the population and Jackie was the first wheelchair that had turned up that day. “That’s because it’s hard to get in,” she said. “Now they know there’s proper access they won’t have to use a postal vote.” Harrumphing was heard…..

But two per cent is underestimating the disabled people in Britain.

According to Jamie Szymkowiak, founder of the One in Five campaign for more disabled politicians: “One in five of us self-identify as being disabled, which includes mental health, learning disabilities and long-term health conditions.”

The new House of Commons now has five disabled MPs, including the amazing Jared O’Mara, who has cerebral palsy and totally unexpectedly took his Sheffield seat from Lib Dem leader Nick Clegg!

So, perhaps we’ll get a change in attitude which favours the many and the few. That may have to begin with rethinking physical access to all our public buildings. And then rethinking attitudes to the more invisible disabilities like deafness and autism. 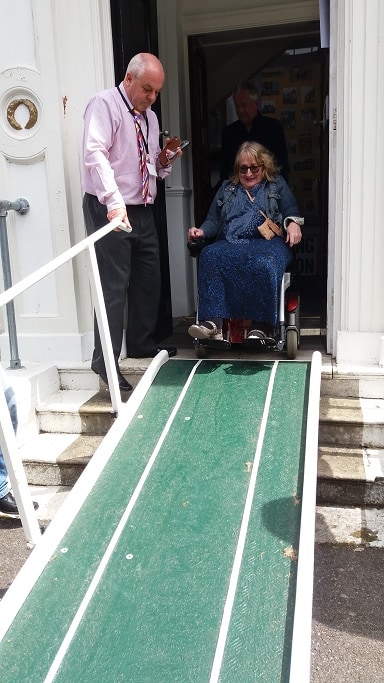 Access to the vote is only the first step – or turn of the wheel. Jackie certainly feels her voice is at last being heard.

But maybe we all need to be speaking out for the disabled and vulnerable and not seeing them as just a few expensive nuisances.