A group of Russian artists – under the name Cardboardia – visited Ramsgate on Tuesday.

The group were in town to meet Ramsgate Festival organisers and local artists at Arts in Ramsgate, Harbour Street, for what they described as “A Hi! Level Meeting with the Tyran of Cardboardia”

The Tyran, who heads up Cardboardia, and people in Ramgate were invited to join in and create their ideal world in cardboard.

During the Ramsgate Festival, Cardboardia and everyone they can recruit to their cause, will be building giant cardboard boats and sailing them through the town, as part of Jimmy’s Boatyard events taking place Monday to Friday.  The cardboard is not important, they say, it’s all about bringing people to together to have fun and create stronger community bonds. 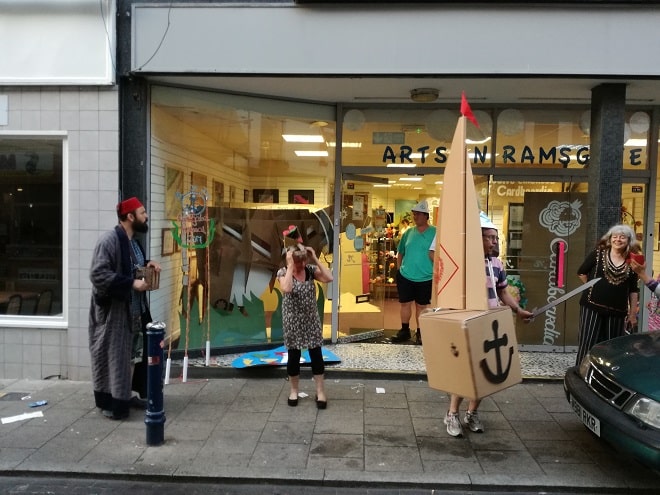 The meeting on Tuesday ended with a street party, fishing for cardboard fish and dancing through Harbour Street and down to the harbour. The throng were wearing giant cardboard fish heads they’d made during the course of the evening. No alcohol was involved!

Passers-by with children stopped to play and customers at local businesses, including the Ramsgate Tandoori, and the bars on Harbour Street, came  out to marvel at the strange spectacle.

The Tyran had an interesting wind up machine which played music.

Cardboardia are currently working in Birmingham and Hebden Bridget but are based in Moscow.