Pavement ‘street art’ is being used in the battle against under-age drinking in Thanet.

Pavement stencils are being put in place by the community alcohol task teams launched last March to help combat the issue.

One stencil has been created outside Londis in Broadstairs.

The Community Alcohol Partnerships, made up  with members from local authorities, police, schools, retailers, neighbourhood groups and health providers, aim to reduce the sale of alcohol to young people, advise them on the dangers of drinking and provide alcohol-free activities through youth services and local charities.

The CAP groups target and prosecute adults found to be buying alcohol for under-18s; carry out patrols and confiscate alcohol from young people found to be drinking and work with schools and parents.

Kate Winstanley, Director of Community Alcohol Partnerships (CAP), said the stencils are an ‘effective reminder’ that buying booze for underage youngsters is against the law.

She said: “Whilst we have made great progress in reducing direct sales to under 18s via use of Challenge 25, it’s unfortunately still common for under 18s to obtain alcohol by asking adults to buy it on their behalf – proxy purchase.

“At CAP we work hard to raise awareness of this issue and protect children from alcohol harm.

Proud to be working in partnership with @kentpolicethan and C. A. P. to cut down underage drinking pic.twitter.com/A3uhjaKrm2

“We’ve found that pavement stencils like this are a great way of highlighting the issue – they warn adults not to buy alcohol for children and support staff by showing that proxy purchasing will not be tolerated and shops have the right to refuse sales.

“We’ve used stencils like this all around the UK in areas which have high rates of underage drinking and found they are a very effective reminder.

“The paint spray is chalk-based and temporary and we always gain permission from the shops involved and from the local council – in this case Kent County Council Highways – to use them.”

Government health statistics show there were 46  alcohol-specific hospital stays for under 18s between 2012 – 15. This puts Thanet, 10 above the England average and in the red area – signifying worst in the country. 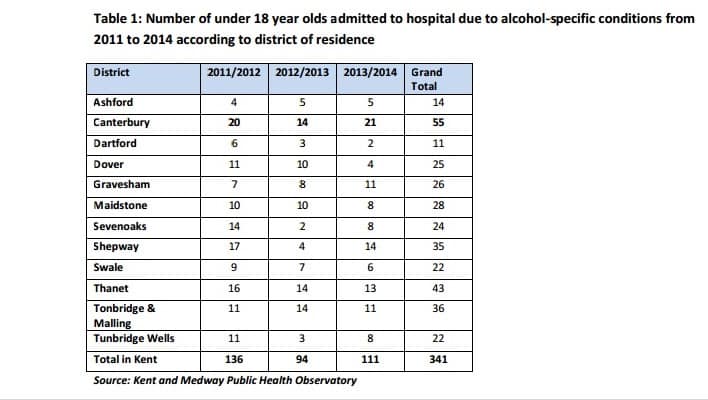 Data from the Kent and Medway Public Health Observatory for 2011-14 flags Thanet as having the second highest number of  alcohol-related hospital stays for under 18s in Kent. Only Canterbury had a higher number.