Well, that’s that done. This weekend just gone, a pal of mine and I did a very long walk in London in aid of Pilgrim’s Hospice; a very worthwhile cause, I hope you’ll agree.

Diana and I genuinely enjoy the walks we do (we’ve done 13 now, for various causes), and we chose the local hospices this time because both of us have seen people live out their final days in the Margate hospice and it was the least we could do to give something back,you still can, by the way, right here – https://www.justgiving.com/fundraising/londonbridges2017

This walk was an intriguing one, as it wasn’t organised through an organisation with hundreds or thousands of people attending; it was just the two of us, doing the “bridges challenges”. This is where we cover every single bridge from Tower to Albert – 14 in total – by crossing them all one way … and then turning round and doing them again in reverse order. Sounds pretty easy, right?

Well, it’s not the hardest thing anyone’s ever done – up in Scotland over the weekend, someone walked over 50 miles overnight to raise money for cancer research – but it did require that we were relatively fit, and that we didn’t have much shame.

‘Alright, we dressed up’ 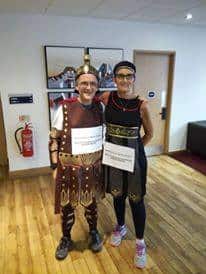 Why no shame? Well, you see, we dressed up a little bit … alright, we dressed up a lot. I was a toga-wearing Roman Centurion, and Diana was Cleopatra. Slight historical revisionism, perhaps, but we do rather enjoy dressing up, and it rather attracted a lot of attention to us.

We started early, as we are often wont to do, but London – as anyone who has ever visited it will know – doesn’t stay quiet for very long. By 9am, we were an hour into our walk, and foot traffic was building fast; half of our journey involved weaving in and out of people who were playing the traditional tourist role of gawking in the most awkward of places.

But still, I shan’t dwell on that, else I shall start ranting. Fortuitously, the sun bore down on us all day, although this had the side-effect (because I hadn’t considered the possibilities) of me going from abject paleness to lobster red in a heartbeat. I’m embarrassed at how quickly it came on without me even considering it, but there you are. I was like a Belisha beacon half way through, but just allowed me to be seen from further afield.

So yes, fancy dress is always the way forward – it gets us noticed, and raises the profile of what we’re doing the walk for. Fortunately, both Diana and I have a very high threshold of embarrassment, so it became second nature to us after a while and we actually started wondering why people were staring at us; we completely forgotten about the costumes.

There you have it – two completely genuine historical figures (for a very liberal use of the word genuine) walking round London on a hot, sunny Summer’s Saturday, all for a good cause. It just proves that people will look like anything if it means that people will give money for something they feel passionate about.

Of course, it also helps if you genuinely don’t care what the hell you look like, but that’s a story for another day.