A 1950s American Navy gunboat which has a starring role in a blockbuster movie due out this Summer will leave Ramsgate Harbour for good after a disagreement about mooring fees.

The craft was due to leave this month but a decision by Ramsgate Town Council and town groups to raise funds for the fees means it will now stay until at least July 21 when ‘Dunkirk’ is released on the big screen.

It has been moored up at Ramsgate since last year and proved a visitor attraction, recently featuring as the highlight of a 1940s event in Sandwich and at the Ramsgate Spring Spectacular last weekend.

The gunboat is also expected to be a major draw when feature film Dunkirk is released on July 21.

The movie is set during World War Two, and focuses on the Dunkirk evacuation, which Ramsgate played a major role in with the Little Ships that carried out the epic rescue operation leaving from its harbour.

The film is a co-production between the Netherlands, the United Kingdom, France, and the United States.

Filming began on 23 May 2016 in Dunkirk, France, and  stars include Tom Hardy, Kenneth Branagh and former boyband singer and X Factor winner Harry Styles of One Direction.

The P22 filmed on location in Dunkirk last November. 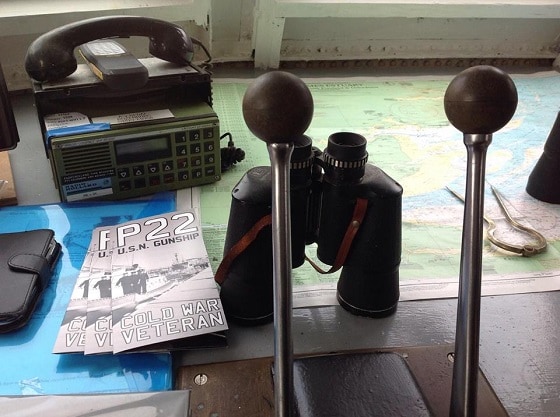 The mooring costs of £650 per month were too much for the owners Barry Field and John Brown, who say efforts to persuade Thanet council to reduce the fees failed.

Now the P22  is due to leave Ramsgate for a new permanent home in Sandwich, although the decision by Ramsgate Town Council this week has delayed her departure.

In a post to social media the pair said: “After the success of the Sandwich Salutes the 40s event, Sandwich and Dover councils have offered P22 a secure mooring at the new Sandwich Quay.

“Even with massive support from our friends at Ramsgate Town Council, Thanet council would not consider reducing the mooring costs of £650 per month.”

The P22 was expected to leave on June 24 according to a facebook post on their page yesterday (June 2) but Mayor Trevor Shonk says the town council and Ramsgate partners have raised taken action to keep them here until at least the Summer release of the movie.

He added: “Ramsgate Royal Harbour, this is  an asset heritage centre for all types of vessels. We need to take back proper control of our Royal Harbour away from TDC whom always seem to wave a big stick at Ramsgate concerns.

“That stick is broken and we are prodding them back with it. We all want to get onboard, thanks to Barry and John.”

Sandwich and Dover councils will also provide the P22 with a secure walk-down pontoon and expect it to become a major attraction.