Well, I achieved something last weekend that I’m incredibly proud of; I completed my 12th marathon. Yes, yes, I know – these people who talk about their achievements like this can be an absolute bore if you’re just not into it as well, but bear with me.

Marathons (be they running – in the original sense of the word – or walking, which is the sort I do) are exhausting, tiring, often excruciating, always painful, and frustratingly slow when you get caught up like a sardine in a vast school. You’re funnelled from one queue to the next before the start line even comes into view and then you’re coerced into massing at an entrance gate that can comfortable admit 20 people at a time, not the 50 that are rather keen, thank you very much, to get through at any one time.

So why do people do them? A number of reasons, I suppose; personal challenges, to prove that they can; to raise money for charity; fitness; to keep their own health and stamina at a high enough level. I started doing them (with my pal Di – I rather suspect it’s her fault, you know) back in 2012, I think it was.

I’d always liked walking – I don’t drive, as I’m something of a liability behind the wheel of a bike, let alone a car – and it was always something I just enjoy doing. I often prefer walking to public transport, where people have the opportunity to annoy me in a thousand different ways (if I’m in a particular mood, even a loud, rattling breath can get become a strain on my patience), and another friend – Chelby, who seems to have it in her head that she was being helpful – suggested that it might be nice to try a walking marathon to raise money for charity as I liked walking so much. 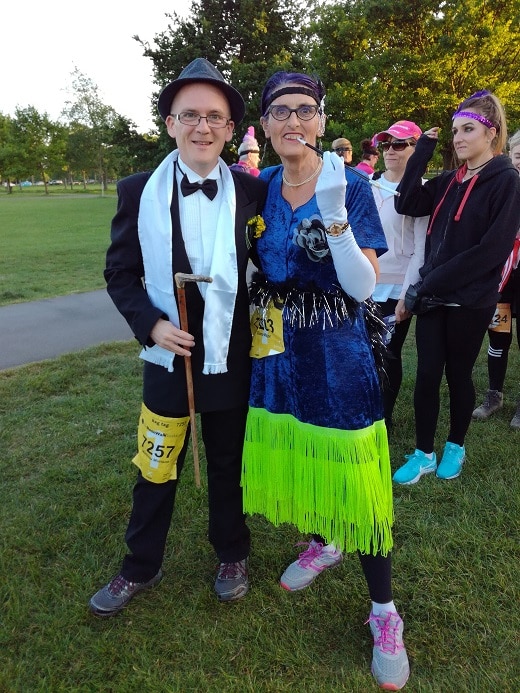 My initial reaction was to laugh, but then I thought about it – as did Di – and we decided to do it. To be frank, we didn’t consider quite how difficult it would be. It’s quite amazing now, to look back and realise how unprepared we were; to go from a standing start to walking 26.2 miles in three months was a wonderful achievement, but not one I ever thought I’d actually be able to do. To be fair, it did take us about nine and a half hours to get round the course, but we did it.

Then something odd happened; we were bitten by the bug – yes, there is indeed a marathon bug, and it can become addictive. We did the Shine walk again the following September; the year after, we did two marathons. The year after that, we did four marathons. Now, we’re averaging three marathons per year, all for charity, and the bug is still there. It’ll be hard to give up, I know it will, so I don’t ever intend to. There will inevitably come a time where I need to scale back because of commitments – life has a rather insistent habit of getting in the way – but my marathon walking will always be there.

Oh, as will the fancy dress; I do love dressing up, and this time was no exception!