The closure of Manston airport in 2014 resulted in the loss of 144 jobs and has led to a saga of competing visions for the site.

The announcement this month that a US logisitics firm wants to buy the site and invest £100 million in to it has reignited hopes, and cynicism, about what the future holds for the site.

Does it have a future of aviation use or will the site become homes and businesses?

October 2013: Infratil announce the sale of Manston airport to Stagecoach tycoon Ann Gloag for a nominal £1, plus accrued debts.

May 15, 2014:  The airport closes with the loss of 144 jobs. An offer of the full £7million asking price for the site by US firm RiverOak Corporation is refused. The payment was offered in a deal where Ann Gloag was asked to leave Skyport’s £2million in the bank account making a net £5million offer.

June 2014: A petition with about 7,700 signatures, to support a compulsory purchase order to preserve Manston airport for aviation purposes, was presented to Thanet District Council

July 2014: Flying school TG Aviation lose a High Court battle to use the runway despite still having 50 years to run on their lease. The company is forced to move to Lydd

July 2014: A petition with  26,524  signatures protesting against the closure of Manston is handed to 10 Downing Street by MPs Sir Roger Gale and Laura Sandys and campaigners

July 2014: US company RiverOak  writes to Thanet council offering to buy and run the airport and fully cover all costs, including the CPO.

July 2014: There is a fire sale of Manston assets

August 2014: TDC issue a formal notice and the process of finding an indemnity partner for the Manston CPO begins

September 2014: The site has new owners – Chris Musgrave and Trevor Cartner of Discovery Park. A second fire sale is held.

December 2014: The Labour controlled council decide not to proceed with a CPO stating there was not a suitable indemnity partner

February and March 2015: Transport Select Committee looks at the Manston airport issue as part of its examination of smaller UK airports. Pauline Bradley, Director, Manston Skyport Limited and Alastair Welch, Interim Director, Kent Airport Limited, are grilled about the actual ownership of the Manston airport site but the question is never fully answered.

June 2015: An Independent review by PwC, on behalf of the Department for Transport, into the process on decisions about the future of Manston Airport is completed. The report is critical of Thanet council’s approach to the CPO indemnity process and towards the only remaining candidate of four partners – RiverOak.

The same month a presentation is given and the name Stone Hill Park is revealed for the site by Mr Cartner and Mr Musgrave. Images used in the presentation come under the spotlight and Pinewood Studios demands they are removed.

July 2015: It was announced that the site may be used to house overflow lorries from Operation Stack. This did not take place

October 2015: The planning application for change of use of airport buildings is refused.

The same month TDC Cabinet agree to take no further CPO action on Manston saying RiverOak do not meet the indemnity requirements.

December 2015: It was announced that RiverOak would undertake a Development Consent Order (DCO) process to acquire permission from central government to reopen the airport

January 2016: Lothian Shelf (718) appeal the decision of the Planning Committee over Building 870 and the non-determination of the other three applications.

February 2016: Thanet District Council announced a total of five expressions of interest had been received, with three being carried forward to the next stage of the CPO process

October 2016: It is reported SHP received payments totalling £3.539 million from the Department for Transport to keep Manston airport on standby as a lorry park

October 2016: AviaSolutions publishes its report, commissioned by Thanet council at a cost of £50,000, into the viability of Manston’s future. The conclusion of the report was ‘airport operations at Manston are very unlikely to be financially viable in the longer term and almost certainly not possible in the period to 2031’.

Thanet council say the report means  the authority does not have sufficient evidence to continue to designate the site ‘for aviation use only’ within its Local Plan.

MP Sir Roger Gale says he will quit politics if Manston does not reopen as an airport. 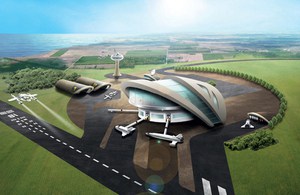 The same month Lib Dem Russ Timpson suggests Manston could be used for aircraft salvage or the development of a space port.

November 2016: Mr Cartner and Mr Musgrave sell Discovery Park to an investment company to concentrate on their plans as majority shareholders, with partner Ann Gloag, for Stone Hill Park.

December 2016: UK registered RiverOak Strategic Partners Ltd buys the financial, strategic and operational responsibility for the redevelopment of Manston and seeing through the DCO from the US RiverOak corporation. The US firm is no longer involved with the Manston project.

January 2017: Plans to axe the aviation-use only designation at Manston airport go out to public consultation as part of the draft Local Plan.

February 2017: Disruptive Capital, with financier Edi Truell as chairman, say they will commission a report on their plans for aviation use at Manston airport

March 2017: A public inquiry hearing into the refusal of change of use applications for four buildings on the airport site is held.

The hearing also leads to some questions about RSP’s funding vehicle M.I.O Investments, which is registered in Belize.

April 2017: RSP threatens legal action over an email which RiverOak Strategic Partners Ltd (RSP) say Cllr Wells sent to 35 members of the authority and which, they say, contained defamatory allegations against RSP and  M.I.O Investments.

May 2017: An unnamed US logistics firm announces its interest in taking ownership of Manston and plans to put £100m into the site. Represented by Dale Crawford of DTD Consult the firm says the aim is to relocate 12 aircraft currently in Europe to the Manston site and plan to gain a compulsory purchase order for the 750-acre plot.

SHP say they have no interest in selling the site.

May 2017: Following meetings with Thanet council Dale Crawford says the American firm is now looking at options for a direct purchase.