Thanet council staff have carried out repairs after yet another Thanet park was vandalised at the weekend.

Work to mend destroyed fencing around the play area in Pierremont Park, Broadstairs, has been completed after the pieces were ripped out sometime last night (May 7). 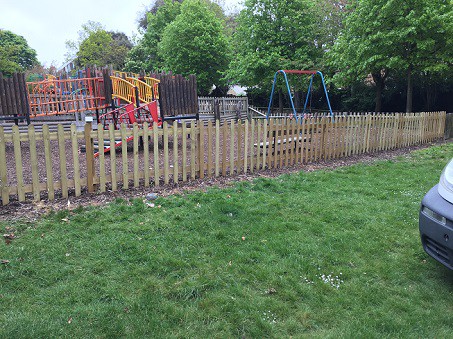 The latest incident follows the targeting of equipment at Memorial Rec last week.

A Thanet council spokesman said: “The council works hard to maintain our local parks so, after the fire at Memorial Recreation Park last week,  it was disappointing that vandals damaged the fencing which surrounds the play area at Pierremont Park in Broadstairs over the weekend.

“Our minor works team promptly repaired the fence on Monday morning at a cost to the council of approximately £350 in resources and manpower which could have been spent elsewhere.

“TDC spends approximately £180,000 a year to maintain and upgrade playground facilities and access for the benefit of families across the district. We adopt a zero tolerance approach to vandals who think it is acceptable to damage equipment and potentially endanger the safety of park users. Anyone with information can call the police on 101.”

Part of the equipment at the site, which was installed after a campaign by residents in 2015, had been burnt out.

Ms Barker said the aim of the campaign is to get CCTV installed and signs warning that criminal damage will be punished.