If you love an antique bargain and fancy being on the TV then you need to head to Ramsgate tomorrow (May 7).

BBC’s Antiques Road Trip are due to film at the Petticoat Lane Emporium in Dumpton Park Drive.

The team, which includes Kate Bliss and Paul Laidlaw, have revealed they are hitting the Kent coast with questions about where best to get an ice cream around Deal and Dover. But the Emporium has also revealed the pair will be visiting and filming for series 15 of the BBC 1 show. 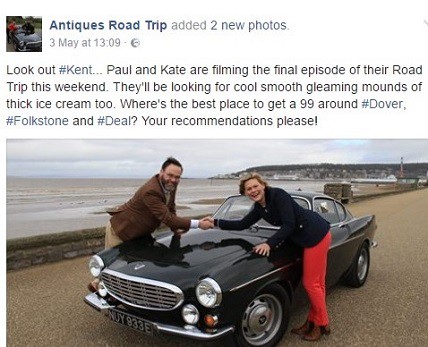 Experts from the programme ‘Road Trip’ in pairs as they visit the most far flung of antiques shops, markets, car boot sales and even the occasional chip shop, buying items that they eventually take to auction in the hope of selling them for a profit. If they succeed, the proceeds will be donated to Children In Need.

Posting to Facebook the Emporium told customers to get their “party frocks on” ready for the film crews.