More than £7,000 has been raised at a charity dinner in honour of a former East Kent College catering student who lost her battle with cancer last year.

Emily Mackay was diagnosed with a rare bone cancer, osteosarcoma, in November 2013, when she was just 17.

Emily was diagnosed after she started to feel pain in her right thigh which doctors initially thought was muscle strain from playing netball.

Despite undergoing four months of physio the pain worsened and she was sent for an ultrasound which revealed cancer in her thigh bone.

The teenager deferred her college course for one year to undergo treatment, including surgery to replace part of her femur with titanium and to remove 70% of the surrounding muscle.

When she returned to the Broadstairs campus the bright and conscientious student became passionate about launching Emily’s Dinner in aid of The Teenage Cancer Trust and started the event with her catering tutor Gareth Oliver. This later grew into the campaign #inspiredbyEmily. 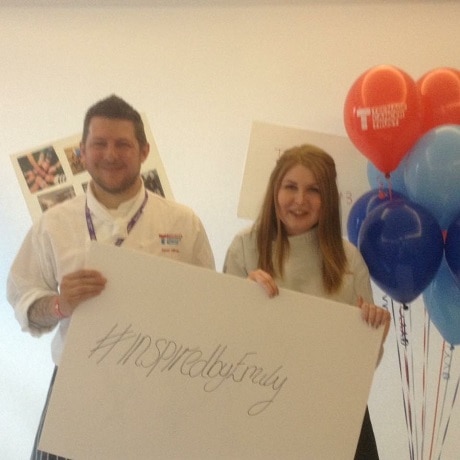 The blog provided an honest account of living with the disease and a platform to discuss all things food, share recipes and discuss the charity dinner, which has raised a staggering £23,730 since it began.

Despite undergoing treatment, the passionate chef and netball lover  lost her battle with the disease on the morning of her 20th birthday last June at her home in Broomfield.

This year’s charity dinner was the first to take place since Emily’s death. The black tie event, which Emily’s family attended, raised £7,211. It included a raffle and auction.

The event has grown in stature since 2014, with the latest dinner serving a seven-course gastronomic feast for 92 guests within the plush surroundings of The Yarrow Hotel.

Mouth-watering dishes such as roast pressed belly of Dingley Dell pork and Emily’s own brownie recipe formed part of the impressive menu.

Chef lecturer Mr Oliver  said: “A record £700 of raffle tickets were sold this year and it was brilliant to see students from across the college take part: Entry level, advanced craft, student support and lecturing staff all volunteered to help raise awareness and funds for this great cause.”

Sian Cooper, regional fundraiser South East for the Teenage Cancer Trust, said: “The incredible passion and drive from students, staff, family and friends who continue to raise money and awareness for Teenage Cancer Trust in memory of Emily is truly inspirational.

“The evening was something very special, with the students putting on an incredibly professional service and a spread of delicious, mouthwatering food. I can’t thank Gareth Oliver, the staff and students of East Kent College enough for the incredible work they do year on year to keep the #inspiredbyEmily legacy as bright as ever.

“The continuing support for Teenage Cancer Trust, a charity that was so close to Emily’s heart, helps us to make sure that no young person faces cancer alone.”

Mr Oliver added: “Even though our inspiration is Emily, she always wanted these events to be about the charity that helped her so much through her battle. That’s the kind of girl she was.”

Find out more about the Teenage Cancer Trust here