Thanet council Cabinet members have given the green light to the first stage of proposals to change free car parks and on-street parking areas to pay and display and bring in a batch of new resident’s permits.

At the meeting last night Cabinet member Cllr Suzanne Brimm told councillors that the scheme would bring in “much needed income to invest in parking schemes, maintain parking stock and pay for new technology.”

Phase one of the scheme is due to be implemented in June and phase 2 and 3 being implemented over the next 12 to 18 months, depending on the outcome of public consultation.

The proposals affect 5 car parks and on-street parking across the isle.

During the meeting ward councillors spoke against the plans and it was suggested Westgate should be withdrawn from the plans entirely.

Cllr Carol Partington said: “The parking strategy cannot simply be about restricting parking. High parking charges drive people out of town centres and harms local shops. Westgate does not have a car park central to the shops and on-street parking makes sure businesses are a success. Westgate needs to be removed.”

Her call was backed by Cllr Ash Ashbee who said a petition raised against the proposals had gathered 300 signatures in four days.

Ward councillors for Minster, Broadstairs, Reading Street and Margate all spoke against the proposals.

Questions were also raised about the income the scheme would bring, whether it would just push motorists into other areas and cause congestions and road-blocking and how Marine Drive in Broadstairs could be made pay and display when the road is unadopted, needs resurfacing and ownership is not clear. 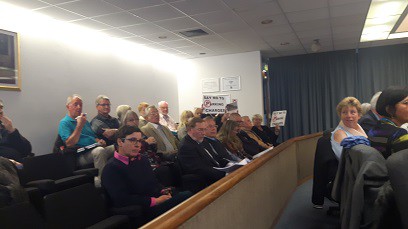 Residents also attended the meeting, some with placards protesting against the plans.

Council leader Chris Wells said  cuts in government funding had forced councils, including Thanet, to look at revenue raising. He also dismissed claims that the issue should be dealt with after the June General Election saying it was “business as usual.”

The council will now hold a 28 day consultation with ward councillors. Members of the public can voice their concerns through their councillors. The proposals will also go to the Joint Transportation Board meeting scheduled for June.

Car Park and possible extension and upgraded of parking on Marine Drive. Seasonal only charges.