This Sunday (April 16) is the sixth birthday of Margate’s Turner Contemporary.

The art gallery opened in 2011, 10 years after the organisation behind it was first formed, on the same site as the boarding house where artist J. M. W. Turner stayed when visiting the town

Designed by Sir David Chipperfield, the building has been visited by prominent guests including Queen Elizabeth II  on 11 November 2011, and Her Royal Highness the Duchess of Cambridge  on 11 March 2015.Previous Prime Minister David Cameron also visited the gallery on 4 July 2013 to celebrate Ramsgate’s London Array windfarm.

This year the gallery had a blockbuster autumn exhibition, JMW Turner: Adventures in Colour . It brought a display of over 100 of JMW Turner’s oil paintings and watercolours to Margate, loaned from public galleries and private lenders across the globe.Visitors were able to see JMW Turner’s work on the very site where he made these works.

This bank holiday weekend, there’ll be special cakes in the café and a workshop which invites visitors to undertake a spot of time travel through the gallery’s history.

The free workshop will be held on Monday (April 17) from 1pm-4pm in the Clore Learning Studio.

Those taking part can help to create a timeline celebrating all of the responses to exhibitions over the last 6 years and looking back at artists who have been featured at the gallery since it opened.

Victoria Pomery OBE, Director of Turner Contemporary, said:  “It’s been another phenomenal year for Turner Contemporary. Our artistic and learning programmes continue to challenge and inspire our audiences. Research demonstrates the significant impact that Turner Contemporary has had on building a healthy, cohesive community. We’re looking forward to a successful and vibrant summer.”

In October 2016 the gallery launched its Social Value Report findings at the House of Commons, revealing its social impact.

This year  coverage about the gallery has reached 178 million people with an advertising value of almost £5m.

This month Margate has been recognized as one of Britain’s Best Seaside Towns by Rough Guides with Turner Contemporary “glinting proudly on the seafront , a beacon for the town’s arty vibe”.

In 1998, the leader of Kent County Council and representatives of Kent Artists met to discuss the idea.

At the same time, plans were being developed to create a cultural quarter in Margate’s Old Town.

In the late 1990s, Kent County Council offered to fund and support the building of a new landmark gallery (later joined by Arts Council England and the South East England Development Agency).

In 2001, Turner Contemporary was officially established, Victoria Pomery was appointed as director and Droit House on Margate’s stone pier was opened as the exhibition space.

In July of that year David Chipperfield Architects were appointed to the project.

From 2008 to 2011, the building was constructed on Margate’s seafront 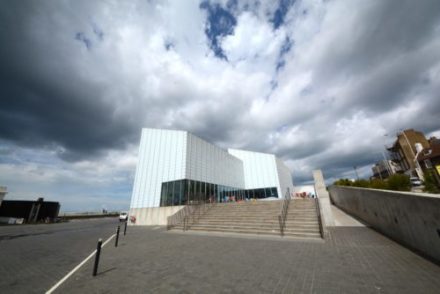 Positioned on a plinth to protect it from the high winds and sea, the building is made up of six identical interlocking north-facing rectangular blocks.

To date Turner Contemporary is credited with generating £50 million for the local economy; been instrumental in the opening of 72 new businesses; safeguarded 155 jobs  and attracted over 2.3 million visits