Archaeologists have been commissioned for work to start on the site of the Margate Caves this Summer after a fundraiser hit its target with 21 days still to go.

The crowdfunder launched by the Margate Caves Education Community Trust aimed to raise £10,000 as part of the project to get the former chalk mines back open to the public by 2019.

It has already busted through that target and now the Trust hopes to hit £15,000.

The Caves group  secured a grant of £1,115,700 from the Heritage Lottery Fund (HLF) and more than £420,000  from the Big Lottery Fund for its ambitious mixed-use scheme for the site at the end of Northdown Road.

Over the last six years, the Trust and the Friends of Margate Caves have worked with residents and groups to design a landmark building that includes community facilities, alongside a visitor centre that will provide access to the restored Caves. Designed by award-winning architects Kaner Olette, the building received planning permission in 2015.

Cash will pay for the visitor centre, including a community café, to refurbish the Caves, which were closed in 2004, and to provide much-needed community facilities.

The crowdfunder  will pay for archaeological work and for events, workshops and talks before and during the building of the new visitor centre and community rooms.

Trust spokesman Dan Thompson said: “It’s great that only halfway through our campaign we’ve hit our target. And it’s really good to see so many people standing behind our plans.

“We’ve now commissioned our archaeologists and are starting a series of events to get people involved in our plans.  “We’ll see work start on the site during the summer.” 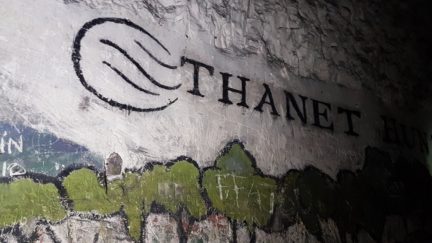 The funding also supports a series of commissions for artists, an activity programme that takes the Caves out to the community, and the development of a learning scheme for schools. It will provide training for volunteers not only at the Caves, but also those working at other heritage attractions locally.

How to get involved

As part of the crowdfunder people can donate any amount or chose a fixed total with rewards, such as a £10 donation earning a Caves supporter pack, £25 for a Caves shopper deal right up to £1,000 to be a Caves explorer and have your name on the new visitor centre wall or £5,000 to be a Caves VIP with invites to the dig and a private tour.

To find out more, and make a pledge, go to http://www.crowdfunder.co.uk/margate-caves