Crochet and knitting ‘bombers’ are at work on the isle!

Last month we shared pictures of the crochet decorations popping up in Ramsgate.

The village was last blitzed by knitters at Christmas with festive toppers covering post boxes in numerous streets.

Crochet poppies have also been placed in Albion Place, Ramsgate, by the Crafty Poppies group.

The display is to commemorate the death of 11-year-old Alan Battersly who died in a World War Two bomb attack in the town.

The group is working towards an installation for November when Remembrance Sunday is marked in honour of all those who have given their lives in conflict. The main project though will be a special display for November 2018 which is the centenary of the end of World War One. 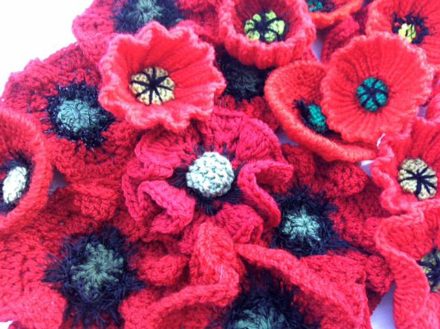 A group in Minster is also creating knitted poppies for the anniversary and can be found on the Minster Village Poppy Project facebook page.

If you can crochet or knit join Crafty Poppies on facebook. The group is also holding a meeting on April 26 at AiR, 18 Harbour Street, at 7pm.