Thanet District Council has launched a crackdown on flytippers blighting the isle.

The aim is to educate householders about the right thing to do with their rubbish and to reduce the amount of household waste that is fly-tipped by rogue traders.
The campaign, which launched this morning with a staged fly-tip of rubbish collected over the preceding weekend, aims to get the message across that if a person’s rubbish if dumped – even if they gave it to a third party to dispose of – they can be prosecuted and end up with a fine and a criminal record.

Prosecutions carried out by TDC include that of Jay Philips from Ramsgate. He was taken to court on 7 March and convicted of four charges of illegally dumping waste after being caught loading and unloading rubbish from a car and dumping it at Ebbsfleet Lane North.

He had advertised on Facebook to dispose of other people’s waste and was sentenced to 150 hours of unpaid work, £627.14 fine and £120 legal costs.

The campaign is in addition to a new £400 fixed penalty notice introduced last month.

Cllr Suzanne Brimm, Cabinet Member for Community Services, said: “Fly-tipping incidents in Thanet are a menace, blighting communities and our countryside and costing the council an eye-watering £109,550 a year.

“We need the public to understand that their rubbish is their responsibility and they must do the right thing with it.

“Giving it to a ‘man with a van’ who offers to get rid of it cheaply could prove costly for people and result in them getting a criminal record. We all have a duty of care and the #CrimeNotToCare, campaign will help explain exactly what that is and how we can protect ourselves.”

“Just this morning we have had a flytip in St Nicholas. We need to highlight this issue as it is blighting our countryside and district.” 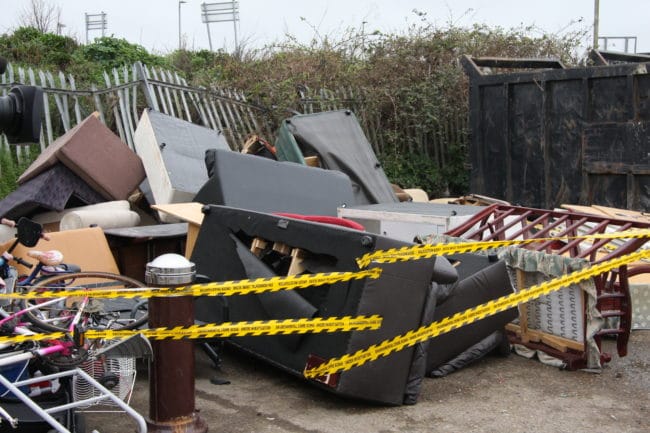 It will also be undertaking monthly deep cleans of nominated areas of the district. The deep cleans involve the council’s street cleaning teams working together at the same time in a specific area, as well as offering a bulky waste collection to residents in the roads they are focusing on.

For more information on the campaign, visit www.thanet.gov.uk/crimenottocare.
To report a fly-tipping incident, contact: streetscene.enforcement@thanet.gov.uk or call 01843 577115.