Thirty-five women from the East Kent Waspi group joined others from across the country to march on Westminster.

The demonstration on International Women’s Day (March 8) was by the national Women Against State Pension Inequality (WASPI) movement which is fighting government changes to when pensions will be paid. Some 3,000 women turned out for the event.

East Kent Waspi coordinator Penny Anne Wells said: “It is very clear there is an increased sense of anger. We were a lot louder at this demo.

“There were 35 women from East Kent and we heard some wonderful speeches from lots of supportive MPs.

“ We have really felt the momentum going up a notch. This has really given us a chance to let the media understand our fight.” 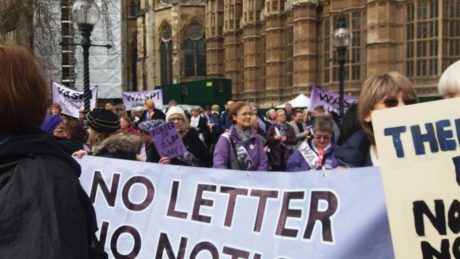 The campaign aims to highlight hardship and unfairness the movement say is suffered by women born in the 1950s, on or after the 6th April 1951, as a result of the Government’s alterations to the State Pension Age (SPA) and the lack of notice given about the changes, by the Department for Work and Pensions.

The changes mean the age at which women qualify for the state pension is due to rise to 65 in November 2018 and 66 by October 2020.

The aim is to bring it in line with men’s retirement age. Increasing life expectancy also means the government needs to make pension payments later in a person’s life.

A version of the plans was first outlined in 1995, when the then-Conservative Government planned to gradually raise women’s retirement age to 65 between 2010 and 2020.

This was followed in 2007 by a Labour announcement that both men and women would see their retirement age go up to 66 between 2024 and 2026.

But in 2011, Chancellor George Osborne brought forward the timing of both changes to 2018 and 2020 respectively.

This meant changes for women coming in much quicker than expected.

Women who had been expecting to start drawing their state pensions between 2016 and 2020 found out in 2011 that they would face a delay.

A further pension age rise to 67 is planned by 2028 and another to 68 is likely in the following decade.

To join the group email pensionrebels@gmail.com