Thanet is celebrating its rich history of novelists and poets  in recognition of VisitEngland declaring  2017 to be the Year of Literary Heroes.

The announcement is in recognition of the 200th anniversary of Jane Austen’s death and 20 years since the first Harry Potter book.

Thanet has its own trail of famous authors who have written their masterpieces while visiting the isle.

2017 marks the 200th anniversary of the death of Jane Austen (1775–1817.The novelist visited Ramsgate in 1803 when it was a garrison town during the Napoleonic wars and her beloved brother Francis led the Sea Fencibles set up to repel invasion. Jane was also eager to meet her future sister-in-law, local girl Mary Gibson – the “lovely couple, side by side” wed in 1806, as celebrated in Jane’s poem, ‘Post Haste From Thanet’.

Jane hinted that Ramsgate’s sea breezes could loosen morals and manners as well as bonnets and collars. It’s in Ramsgate that 15-year-old Georgiana Darcy is put at risk of being seduced by the deceptively charming libertine Mr Wickham in Pride and Prejudice; and in Ramsgate that Tom Bertram in Mansfield Park makes the social gaffe of giving all his attentions to the younger Miss Sneyd “who was not out”, thus offending the elder sister.

Romantic poet Samuel Taylor Coleridge (1772–1834), was more interested in the health benefits of the increasingly fashionable sea bathing and loved to “Ramsgatize”, as he called it, seeking relief from his chronic ailments during a series of holidays, 1819–1833. You will find a blue plaque where he stayed in Wellington Crescent. The Rime of the Ancient Mariner author enthusiastically recorded his experiences in copious letters, including how he plunged from a bathing machine: “It was glorious! I watched each time from the top-step for a high Wave coming, and then with my utmost power of projection shot myself off into it, for all the world like a Congreve Rocket into a Whale.”

Charles Dickens (1812–1870), by contrast, eulogised Broadstairs – “Our English Watering Place” – and it was his favourite seaside escape most summers from 1837 to 1859. “You cannot think how delightful and fresh the place is and how good the walks,” he rejoiced – still the case today.

Join a Broadstairs Town Walk and hear tales of Dickens’ strained friendship with Danish fairytale writer Hans Christian Andersen, who rather outstayed his welcome with the Dickens family. Or look up Dickens’ haunts on a self-guided Broadstairs Town Trail. Old-world fishermen’s cottages, delightful cobbled squares – they’re all still here, transporting you back to a world amid which the author found peace to scribble away at Oliver Twist, The Old Curiosity Shop and Barnaby Rudge.

You can stay in The Royal Albion Hotel with its views over Viking Bay just as Dickens did while working on Nicholas Nickleby, or see the author’s cliff-top “airy nest”, Bleak House, known as Fort House when he resided there in 1850 and completed David Copperfield. The memorabilia-filled Dickens House Museum on Victoria Parade is also a treat, in the one-time home of Miss Mary Pearson Strong, whose chasing of donkey-boys from in front of her cottage inspired the character of Betsey Trotwood and her antics in David Copperfield.

Come to Broadstairs 17–23 June and you’ll experience the town full of costumed Dickensian characters for the popular annual Dickens Festival – this year celebrating its 80th anniversary with seven days of Victorian revelry ranging from music hall to theatre, and lots of scrumptious food. You can always work off the feasting on the 4-mile Turner and Dickens Walk from Broadstairs to Margate, the latter so beloved of the artist JMW Turner and where Dickens enjoyed performances at the Theatre Royal.

The mood at Dreamland, was certainly bubbly as chubby comic anti-hero Billy Bunter and his chums eagerly looked forward to visiting the park, the Winter Gardens and many other “attractions in merry Margate” in Bunter’s Holiday Cruise.

Swallows and Amazons author Arthur Ransome also has connections with the area. Ransome (1884–1967), whose books launched a million childhood sailing dreams, enjoyed regular visits to Ramsgate Royal Harbour and during one trip he saw a picture of a child in a red cap – inspiring the famous headgear of Amazon pirate girls Nancy and Peggy Blackett. The author also used a voyage he made in his yacht from Ramsgate to Suffolk as reference for his book, Peter Duck, and Ramsgate appears again in We Didn’t Mean to Go to Sea – 2017 is the 80th anniversary of its publication – when Jim Brading complains about a gang of wreckers, The Ramsgate Sharks. 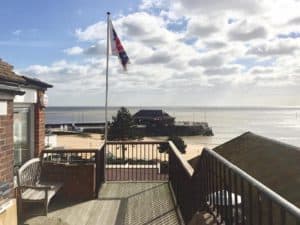 The smuggling heritage of the Thanet coast has provided a rich backdrop for thriller writers too. ‘Father of detective fiction’ Wilkie Collins (1824–1889) stayed with his friend and mentor Charles Dickens at The Royal Albion Hotel in Broadstairs in 1859 and was a frequent visitor to Ramsgate, particularly in the 1870s, where he joined the yacht club and loved to walk, fish and sail, as you can today.

You can spot the blue plaques where Collins stayed in Ramsgate, living a secret double life that confirmed Jane Austen’s views of saucy seaside morality: 14 Nelson Crescent, where as Mr Collins he resided with his ‘housekeeper’ Caroline Graves, and 27 Wellington Crescent, where he became ‘Mr Dawson’ ensconced with his morganatic wife Martha Rudd aka Mrs Dawson and their children.

Built in 1691, North Foreland was the last Trinity House lighthouse to be automated, in 1998. It is where John Buchan (1875–1940) found the title for what is acclaimed as the first modern spy thriller. The author came to the North Foreland in 1914 while his daughter was convalescing and, as the six-year-old little girl counted the steps down to Stone Bay, Buchan hit on The Thirty-Nine Steps title.

Meanwhile the prolific ‘Prince of Thriller Writers’ Dennis Wheatley (1897–1977) wrote extensively of the Margate area in his novel Contraband. As an eight-year-old, Wheatley had attended boarding school in Margate, where the headmaster would read Wilkie Collins to the boys on Sunday evenings.

The Magical Margate Trail and Margate Town Trail are both great self-guided walks that will introduce you to the sights of the town, the theatre, the historic Old Town with curious alleyways and cobbled streets, Cliftonville, and one of the unlikeliest Grade II listed buildings in the country: Nayland Rock promenade shelter. It was here that TS Eliot (1888–1965) wrote part of The Waste Land.

Eliot had come to Margate in 1921 to recuperate from a nervous breakdown. Staying in Cliftonville, he took a tram each day to sit in the Victorian shelter and seems to have been soothed and stimulated by the sea, overcoming his writer’s block. The lines he wrote, bleak but moving, became part of epic poem published in 1922 and hailed as a Modernist masterpiece.

A poet in an entirely different vein, Sir John Betjeman (1906–1984) chose the town for his nostalgic wartime poem ‘Margate, 1940’. He knew “the salt-scented town” from visiting while staying in nearby Birchington

Charles Lamb, essayist, author and friend of Coleridge, first visited Margate in 1801, recording “the most agreeable holyday of my life” in The Old Margate Hoy.

George Bernard Shaw as a poor, unknown young man unsuccessfully applied to become lighthouse keeper at North Foreland, but returned at the height of his fame in 1907 to coach a new actor in his play John Bull’s Other Country at Margate’s Theatre Royal.

Dickens Festival, Broadstairs, 17–23 June: from a Grande Parade featuring Queen Victoria in a horse-drawn carriage to Dickensian feasting and revelry, the festival is celebrating its 80th anniversary in style!

Ramsgate Festival, 22–30 July: explore the town’s creative side, including theatre, music, talks and a writing competition. All the livelier for running concurrently with Ramsgate Week sailing regatta, 24–28 July

Margate Bookie, August 2017: interactive sessions, workshops, talks and author readings inspire everyone to read more and get involved in all levels of writing.

Find more events, history and guides for Thanet at  www.visitthanet.co.uk