Thanet District Council (TDC) is cracking down on flytippers blighting the isle by introducing a new £400 fine for offenders.

The fine means the council’s enforcement officers will issue a Fixed Penalty Notice (FPN) to anyone whose waste is found dumped illegally across the district.

Fly-tipping is a criminal offence and the council has agreed to enforce the maximum available penalty to those who illegally dispose of their waste. There is a £100 reduction in the fine if offenders pay within 10 days. 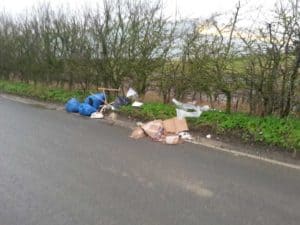 Fly-tipped waste can be classified as just one black bin bag, but it also extends to multiple larger items, such as children’s toys, mattresses, and electronic items, like televisions and fridges.

As part of the crackdown, the council is encouraging residents and members of the public to report any fly-tipping incidents they witness to support their efforts to improve the cleanliness of the district. Anyone who reports a fly-tip is asked to include as much evidence as possible – for example, photographs of offenders and any vehicle registration numbers – so offenders can be promptly traced and prosecuted.

Before the the fine came into force, the council had limited enforcement powers for penalising fly-tippers, which normally involved a lengthy and costly court process. The new fine will enable immediate enforcement. If the FPN remains unpaid, offenders will then be taken to court. Offenders are also warned that non-payment of the initial fine, which then sees them in court, would increase to in excess of £1,000 if found guilty.

Cllr Suzanne Brimm, Cabinet Member for Operational Services, said: “Fly-tipping is a criminal offence and this enforcement power is a much needed way for us to demonstrate our zero tolerance approach to illegally dumping rubbish and waste.

“It is really important that members of the public understand the importance of using registered waste carriers to dispose of large items of household waste. Illegally fly-tipped waste will be traced back to them and a fine issued in our efforts to create a clean and welcoming environment.”