This year marks the 75th anniversary of Operation Fuller (the Channel Dash), one of the most daring and courageous actions in the history of naval aviation, when, on the 12 February 1942, 18 naval aviators from the Fleet Air Arm (825 Naval Air Squadron) flew six fabric-covered

Fairey Swordfish bi-planes from RAF Manston in an attack on the might of the German Battle Fleet in the Straits of Dover.

Thinking that the German force would travel through the Straits of Dover at night, the British Admiralty had stood down the vast majority of its air crews,  leaving just the six Swordfish available to combat the German threat when the ships were identified in daylight hours.

As crews were frantically scrambled, the six biplanes flew on, determined to attack the battleships Scharnhorst and Gneisenau which were in turn protected by 6 destroyers, 40 flak ships and 200 fighter aircraft. Crippled and ablaze before they had even got within range of their targets, the heroic British naval aviators delivered their attacks and paid the ultimate sacrifice with only 5 of the aircrew being rescued and all of their aircraft destroyed.

Two buglers from the Royal Marines band in Portsmouth played an emotional “Last Post” in a moving and passionate service at the Channel Dash Memorial Trust monument alongside Ramsgate’s Royal Harbour to commemorate the 75th anniversary of this military action today (February 12). 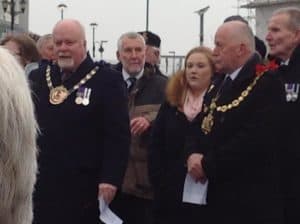 The service was attended by representatives of the armed forces led by The Admiral of the Fleet, the Lord Boyce. The Mayors of Ramsgate, Broadstairs and Margate represented their respective communities with Ramsgate Mayor Trevor Shonk thanking the local public for braving the elements and coming out in such vast numbers.

Two helicopters and two tucano aircraft overflew the service in a poignant salute to those heroes who had bravely fought against overwhelming odds for the freedom of their country.