The former Western Undercliff café and toilets are back on the market after plans for a café, restaurant and flats at the site were ditched by the current developer in a row with Thanet council over further financial contributions.

Tim Burt, who is a partner in Western Undercliff Ltd, said negotiations with the council’s estates department broke down over a demand for ‘excessive’ payment to allow an overhang on the new building which would go over council owned pathway.

He now says he will abandon any future investment in Thanet, adding: “It is not possible to work with TDC as a developer.  We have tried and tried to push this forward at huge loss to ourselves but have been blocked by incompetence and a lack of vision at every interaction.

“They talk of plans to develop Thanet but cannot translate that in to co-operation on the ground.  It is a council overwhelmed by a culture of fear of failure, making the wrong decisions, having no authority to make decisions and hence a strategy of making no decisions at all.
“We will be focusing on our other developments in Swale and East Sussex instead.”

The development was granted approval at the end of last year and the plan was to demolish the derelict café and toilets at the Western Undercliff and replace it with a five storey building with ground floor cafe and outdoor seating, ground floor public toilets, eight apartments and a fourth floor restaurant. 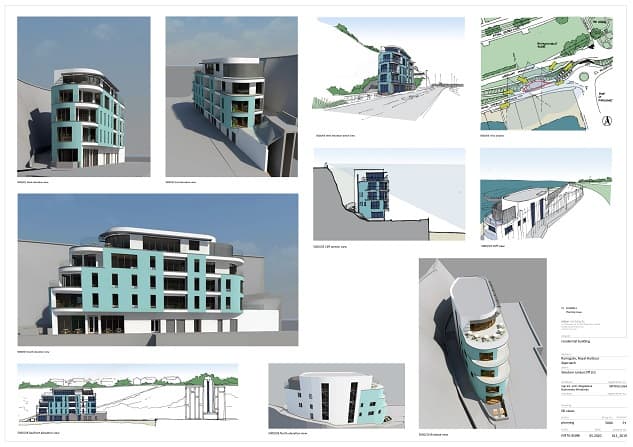 The online auction takes place on December 15. The same auction will see the sale of the Western Undercliff Art Deco lift, which has a guide price of £20,000.

The café, restaurant and flats plans, drawn up by MBW architects, are for a building with “a stepping form” to allow for all apartments to have terraces or balconies as well as a top floor viewing terrace available for restaurant guests.

Western Undercliff cafe, restaurant and flats plan to be ditched over pathway row