For the first time the stretch of coast from Foreness Point to Kingsgate Bay has a dedicated winter cleaner, due to funding from Southern Water.

The part-time beach cleaner role was agreed after talks between the Friends of Botany Bay and Kingsgate and the water company. It follows pumping station and combined sewer discharges that resulted in swimming bans at nearly all of the isle’s beaches and bays.

Barry Manners, from the volunteer Friends group, said: “He will concentrate on the beach and cliff-top from Foreness Point along to Kingsgate Bay – with a weekly foray along to Joss and Palm Bay. Southern Water have demonstrated a far greater willingness to engage with the local community since August, when the business was taken over by Macquarie with £1bn of fresh capital into the business. 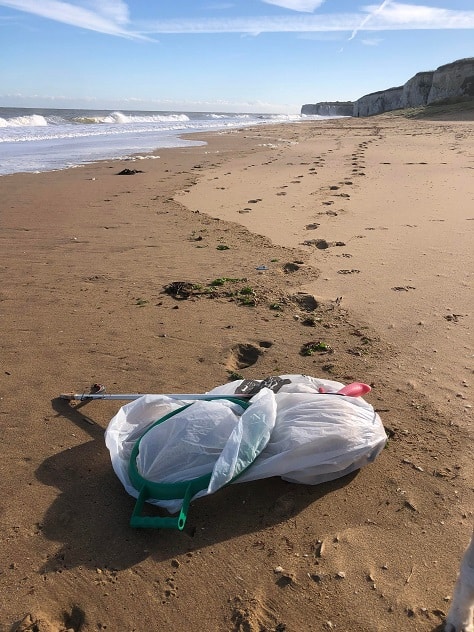 “That said, there is no doubt that they owe significant restitution to local residents for the unacceptable sewage discharges -historic, current and future – whilst they fulfil their promises to upgrade water treatment infrastructure.

“We’d encourage other community and environmental groups to engage with Southern Water to help fund local community and visitor infrastructure and to improve the natural environment. Beach clean funding for Botany Bay is a meaningful and positive first step that we intend to build upon.

“This doesn’t absolve Southern Water from their responsibility to properly invest in long overdue improvements to sewage treatment.

“I would also like to see more emphasis on community restitution from our political leaders. Thanet needs urgent investment in all sorts of tourism related infrastructure. I’d like to see Southern Water being strongly encouraged to involve themselves in projects that will go some way to repairing the damage to the environment and tourist industry caused by sewage releases.”