Support groups say a ‘long, tough winter’ is ahead with a surge of demand at social food shops and food banks in Thanet following the end of the £20 per week uplift for those on Universal Credit and a hike in energy bills.

Universal Credit rates had a temporary £20 per week uplift during the covid pandemic. This was brought to an end on October 6 resulting in a reduction to the benefit equivalent to £1,040 a year.

There has already been growing demand at the Our Shop food clubs in Margate and Ramsgate with 100 new members signing up in less than two weeks.

The shops are run by the team from Our Kitchen on the Isle of Thanet, headed up by founder Sharon Goodyer, and offer goods at drastically reduced prices, meal kits and useful information sessions on nutrition. 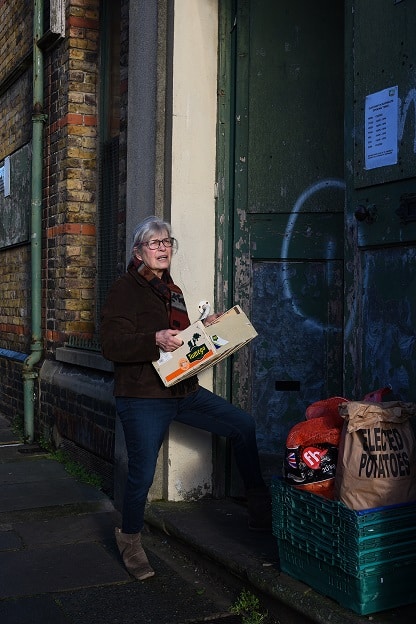 Sharon Goodyer said: “The grim news is that the food crisis is worsening since the government  phased out the Covid ‘uplift’ in the Universal Credit System.

“We’re seeing a massive increase in the number of people that need our help, the situation is critical, we need to come together and work towards a long-term solution to fix this crisis.

“People don’t want handouts, they want dignity, they want to feel empowered. Our Kitchen offers nutritious food to feed their families at an extremely affordable price. The model is based on people having a little money to pay a very small amount to receive a lot more than they would if they went to a supermarket. The reality is that with Universal Credit slashed, they don’t even have a few pence spare.”

County councillor Barry Lewis, who has been involved with the work of Our Kitchen since its inception in 2017, said: “The effect of the Universal Credit cut has meant a surge in demand for food at Our Shops.

“There was a 20% increase in demand in less than two weeks and existing customers needing the service more.

“As one of the most deprived areas (in the country) this cut in UC doesn’t just affect those directly on the benefit but means spending power across Thanet has dropped. People have less disposable income for non-food items and that is devastating for our local economy.

“The cut hits Thanet harder than some other areas of Kent because of deprivation. Fortunately Our Shops can provide a partial solution.”

There has also been a flurry of new members signing up for the MiCommunity shop in Margate’s Old Town, which provides affordable food and household goods for their clients as well as advice for benefits, budgeting and more.

John Finnegan, who co-founded Margate Independent Food Bank and then MiCommunity, said: “We had 28 new members in just one week.

“We shall have to increase the amount of tinned food we stock, make a plea to the local business community for help and increase the grants we apply for.

“It’s going to be a long, tough winter. We are also still looking for somewhere to do deliveries from as there are people who need extra support and help. We are trying our best to help as many people as possible.”

Mr Finnegan said government funding had been available for food banks last year but has now “dried up.”

Thanet Food Link, which runs voucher referral food banks from St Paul’s Church in Cliftonville and at St Peter’s Baptist Church, says the impact of the UC cut has not yet filtered through to them but they are expecting it to happen.

A spokesperson said: “There has been a slight increase in demand but the loss of income from UC has not really filtered through fully yet. Thankfully it coincided with Harvest donations from schools and churches.

“We expect that (this month) and up to Christmas we may see the full impact. We are not yet at the distribution rates we saw in June and July 2020 though which was 1000 parcels per month.”

Data shows that Thanet has 18,325 UC claimants with more than a third of those in work but on low incomes.

Following the UC rate reduction the government announced a £500m Household Support Fund to be distributed through councils to help those most in need.

Small grants to meet daily needs such as food, clothing, and utilities will be available.

The new fund will run over winter and it is understood Kent County Council will administer it although local DWP officers say they are still waiting for details of how people can access the grants.

For a list of support organisations, including food clubs and food banks, go to www.thanetsupport.co.uk/category/Help-and-Support

Find Our Kitchen on the Isle of Thanet at https://www.facebook.com/OurKitchenThanet

Find Newington Big Local (for family cooking and other support) at https://www.facebook.com/NewingtonBigLocal