Ambulance, fire service and police have been called to Ramsgate after a car went through the  glass front of Co-op Funeralcare shop in King Street, on the corner of the Plains of Waterloo, this afternoon (October 14).

Fire service, police and ambulance staff are at the scene. (UPDATE) – two people have been injured in the incident, with one man suffering serious injuries. The air ambulance landed in the grounds of Chatham House school and has airlifted one of the injured people. 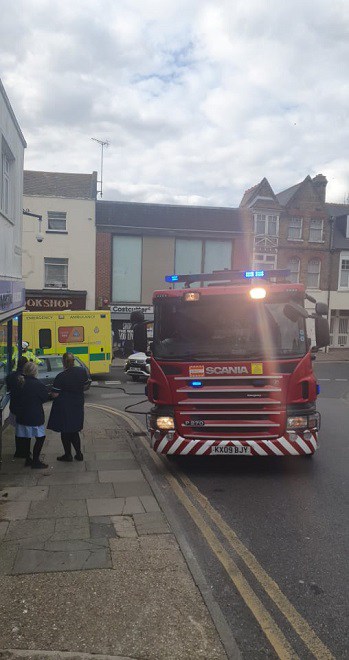 Two occupants in the car are said to no longer be at the scene.

A Kent Police spokesperson said: “Officers are currently in Plains of Waterloo, Ramsgate, following reports that a car has collided with a building. Kent Police was called at 2.47pm. SECAMB and Kent Fire and Rescue Service are also in attendance. Two people have been injured, one person is being taken to hospital via air ambulance.”

A South East Coast Ambulance Service spokesperson said: “We were called shortly after 2.45pm yesterday (14 October) to reports a car had left the road and struck a building in King Street, Ramsgate. Ambulance crews attended and were joined at the scene by the air ambulance service.

“Two patients were assessed and treated at the scene before being taken to hospital. The first patient was airlifted to Kings College Hospital with serious injuries and the second patient was taken to William Harvey Hospital with injuries believed to be less serious.”