Revellers to a Ramsgate Music Hall gig next month will need their ticket – and some tinned food.

Interrobang – made up of Dunstan Bruce (vocals) and Harry Hamer (drums) – both formerly of pop-cabaret troupe Chambawamba – and Stephen Griffin (guitar) ex-, Regular Fries member – will perform at the Turner Street venue on Friday, April 13.

The trio, who formed five years ago, are launching their self-titled debut album, influenced by original punk bands such as Crass, Gang of Four and The Fall, to the Dadaist movement and Berthold Brecht.

But the three are also influenced by politics in music and using that to help bring about change.

Appalled by the UK’s levels of poverty and homelessness, Interrobang has made the decision to link every gig in their upcoming tour -including the stop at Ramsgate – with action in aid of various charities.

Dunstan said: “I really like the idea that human beings can do small acts on a day to day basis, and that it doesn’t have to be grand gestures, that can transform how we live.

“Interrobang have never wanted to be seen as simple entertainment. We have always wanted to be part of a broader coalition of musicians, performers, artists and activists. We have always had something to say about the state of the world and our role within it. We don’t want this tour to just be a promotional venture; we want it to be more than that. 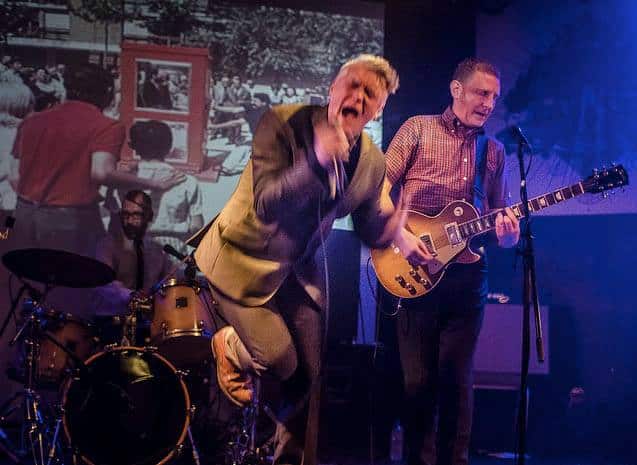 “We have taken the opportunity to make the shows more than just a concert.  To this end we are engaging with a local charity or organisation in each town. These charities are mostly involved in helping the homeless, helping refugees or local foodbanks. What we would like is to ask each and every member of the audience to bring something along to the show to donate to the organisation, so that we can collect these on the door and donate to the chosen organisation of the night.”

For the Ramsgate gig donations of tined food are being asked for to donate to the Thanet Food Link charity based at St Paul’s Church in Cliftonville.

Last year the charity distributed 2010 food parcels and fed 2229 people from across the isle.

Find their most needed items here

Cllr Constantine said:“It’s fantastic that this successful local business and these musicians are not only spreading awareness and a positive message, but that they are also taking direct action.  We need more of this.”

The album and gig details

Interrobang’s album is lyrically inspired by hitting the age of 50 and addresses all those difficult to talk about clichés of the midlife man-crisis. It’s sometimes slightly shirty, occasionally curmudgeonly, but always, always brutally honest.

Interrobang’s gig at Ramsgate Music Hall is on March 13, starting at 7.30pm. Tickets are £7.

Thanet has the highest child poverty rates in Kent, and the south east, according to new data released by The End Child Poverty coalition.

According to the report Thanet has some 10,500 under 18s living below the poverty line, equating to 34.7% of the isle’s youngsters. But when individual wards are looked at the rate is as high as 52%.

At the other end of the scale is Cliffsend and Pegwell with 125 – 15.09% – and Kingsgate with  56 children – 15.46% – judged as in poverty although age demographics of those living in these wards will have impacted those figures.