The strength in depth of the home side’s batting line-up was in full view at Park Avenue this weekend as Broadstairs 1st XI recorded a resounding victory over Gravesend. Winning the toss and electing to bat, once again openers Elliot Fox (18) and Swaroop Dasari (28) established a solid platform, quickly advancing the score to 48 and looking very comfortable.

By the 14th over, however, both their wickets had fallen and it was down to the fresh pairing of Chris Flint and Isaac Dilkes to carry the baton. This they did with gusto establishing a partnership of 114 over the subsequent 22 overs during which time both passed their respective 50 milestones within a few balls of one another.

Flint was eventually caught out for 51 and was replaced by Scott Narraway who quickly joined forces with Dilkes to continue to drive the Broadstairs score up towards 200. Dilkes was eventually out for 65 having provided an excellent exhibition of middle-order batting.

With the score now at 192 and 11 overs remaining Narraway and the incoming Jack Wheeler continued the relentless run scoring and when Wheeler (30) was caught going for another of the expansive shots that had characterised his lively innings, it was down to Narraway to take over, now partnered with Alfie Huntley. Narraway was eventually bowled for 52 with just a few balls remaining and the Broadstairs innings finished on 283-6 with Huntley (6*) and Sam Winsdor (3*) bring proceedings to a close.

Things became even worse for a shell-shocked Gravesend team when they lost their opening batsman Nash who lofted a ball straight to Dilkes at cover off the second ball of the innings, bowled by Jamie Dewell. A further 20 runs were added to the total when Fox struck with a delivery that Walker couldn’t keep out and this dismissal brought Jamaican overseas Johnson to the crease, albeit with a pronounced limp having picked-up a strain during the first innings.

This didn’t seem to hinder Johnson’s ability to hit the ball and he was able to establish a partnership with Abbi that brought some respectability to the Gravesend reply. However, with the score at 73-2, the loss of 3 wickets in rapid succession, including that of Johnson’s rendered the contest all but complete. Although the tail-enders did manage a final flurry, the Gravesend score finished on 144 all out in the 34th over with Dasari doing much of the damage with 4 wickets. The remaining wickets were picked-up by Kidd and Dilkes who claimed two a-piece.

This was as much a team performance in the bowling as it had been in the batting and suggested that the Broadstairs 1st XI were now truly hitting their straps.  Special mention should go to Jamie Dewell and Matt Frewin for some excellent catches in the field and to ‘keeper Jack Wheeler who once again showed his sharpness with two stumpings. Broadstairs Ist XI are home again next week when they take on Gore Court in the knowledge that they will need to continue their winning form to keep with the pace at the top of Division 2. 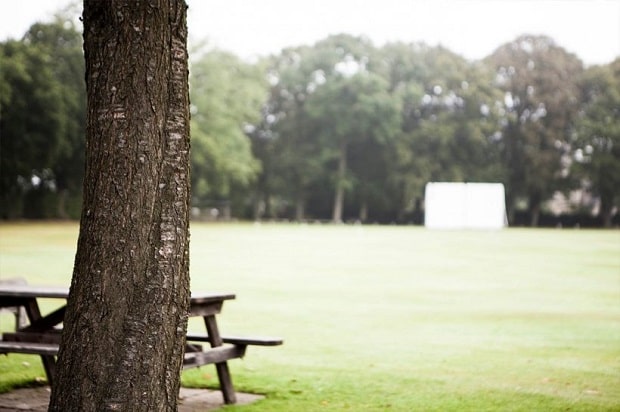 On a red hot day in Gravesend, Second team captain Andy Marshal won the toss and elected to bat on what looked like a belter of a wicket and a lightning outfield.

Marshall and Simpson strode to the wicket, Simpson hitting the first ball for 4, in fact his first 5 scoring shots were boundaries. Marshall edged to first slip with the score on 11, bringing Callum Morgan to the crease, Simpson and Morgan batted sensibly, punishing the bad ball and keeping a tight defence.

With the score on 54 Morgan was cleaned up. Luke Palmer was next in and continued the attacking flare he’s becoming accustomed to, 4,6,6,4, dispatching the Gravesend spinners with some majestic power hitting. It was a surprise when Palmer fell for 21, tamely chipping the ball to mid-wicket, but at 85-3 and with Simpson still at the crease Broadstairs were well placed to produce a big score.

The Gravesend bowlers had other ideas however, Lewis Hewitt and Farjad Yasir falling quickly meant Broadstairs were 98-5. Simpson brought up his 50 but was unable to carry on, being caught on the boundary. Oli Frewin and Brad Ellison were now at the crease and with 17 overs still to go tried to consolidate.

Padhiyar was brought into the attack, removing Frewin in his first over, Ellison in his second over and McCormick in his third over, Broadstairs hope of a big total had now slipped away and 125 had become the target to get at least 1 batting point. Masoud Rangin making his debut for the two’s obliged with a quick 14 before being caught, Broadstairs finishing on 128 in only 41.5 overs.

After an extended tea break that seemed to last forever, Broadstairs were eager to get out and end the humiliation one way or the other. Gravesend opener Sidhu took a liking to Ellison’s usually tight bowling, smashing him to all parts to take 35 from the seamers first 3 overs. Rangin opened up the other end and removed the home teams number 2 and 3, both excellently caught by McCormick at first slip.

Marshall decided to keep Ellison on in the hope of picking up a couple of wickets, when Sidhu finally miscued one and Lewis Hewitt took the catch. At 52-3 Broadstairs started to believe they could get something from this game, Ellison and Hewitt then teamed up again to removed Singh. Farjad Yasir came on to replace Rangin and was back to form, bowling well at the panicked Gravesend batsmen and picking up another wicket.

Marshall kept Ellison going and when number 8 edged to McCormick at first slip and then McCormick himself picked up a wicket caught by wicket keeper Simpson, Broadstairs had surely turned a heavy defeat into an unlikely win. 116-8 and needing 13 to win, there was yet another slip catch, this time for Marshall and Ellison had claimed 5 wickets for the second week running and Gravesend still required 12 with only 1 wicket left. Crucially Hinks, the Gravesend captain was hanging around, Broadstairs dropping a tough chance early in his innings and Arif the number 11 managed to keep out Ellison’s last over, The batsmen chipped away until with 4 required Hinks took on Rangin and found the boundary.

Broadstairs were gutted, a game they should have lost, that somehow they had turned around and should have won. Brian Simpson being the only batsmen on the day to surpass 50 on what should have been a 200+ track. However the bowling and fielding from the second team was again excellent, once the batting line up starts firing properly they will be back in the promotion hunt.

Bond should be back for next week’s away game to Gore Court, but Simpson and Frewin are away. Broadstairs have slipped to fifth but are only 20 points behind second placed Old Wilsonians.